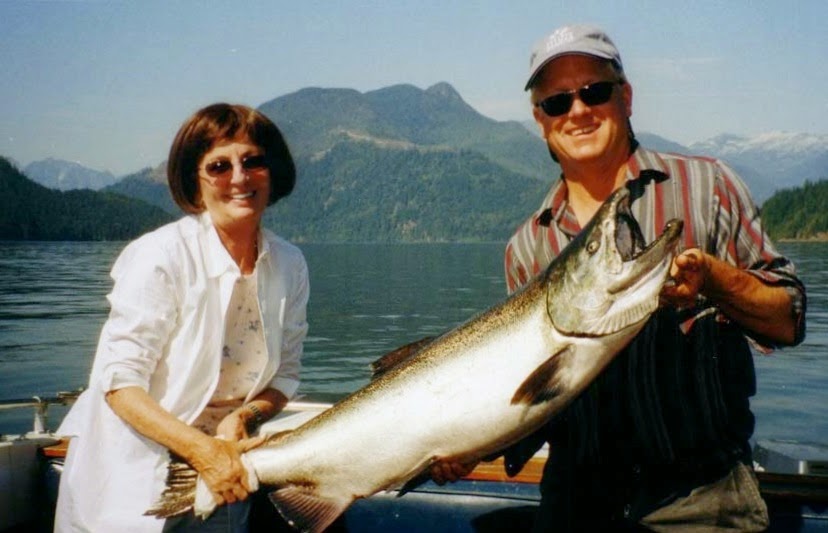 The chinook salmon population is looking very good . The Chinook Technical Committee, which is a group of both Canadian and American stock assessment biologists, has made a very positive forecast for 2014.
Chinook salmon migrate across borders, as do all salmon species, so under the Pacific Salmon Treaty, both countries cooperate in measurement and regulation for conservation. For example, offshore of the west coast of Vancouver Island the majority of chinooks caught are from Washington and Oregon rivers, while a large part of BC chinooks are caught in Alaskan waters.  60 % of the Campbell River/Quinsam River chinooks are caught in  Alaska !  So , there is good reason to make an accurate assessment.
For management purposes the entire coast is divided into a few large areas and, in simplified form, the allowable harvest ( including commercial and First Nations ) for each of the large regions is increased from last year in a range from an 80 % increase, to 2 1/2 times !

I wrote a previous post on the remarkable increase in local coho populations because of an increase in survival rates, and because of the improvement in the vitality of Georgia Strait which caused many of those fish to stay and live in these inside waters, rather than moving off shore. And the forecast for sockeye is so high that everyone is being a bit cautious to believe that it could even exceed the phenomenal parent year 2010.


We fishermen are optimists always, but even the objective measurements are in our favour.

If you would like to read details about the stock assessments mentioned in this post, Jeremy Maynard has written an article about this in the Campbell River Courier-Islander newspaper .  Only a limited number of his columns are available online. http://www.courierislander.com/sports/fishing .

Jeremy is my source for much of the salmon management information that I pass along,  either through his columns, or in meetings, or in person. I count him as a friend, but I think anyone should recognize him as an exemplary, valuable, resource to sport fishing. He has been involved in the organizations and “ politics “ of sport fishing in more ways than I can keep track of.  His most recent column tells the history of the Sport Fishing Advisory Board ( SFAB ), and typically, he doesn't mention his own roles over the years, which include Chair of the whole, Chair of the local committee ( of which I am a member ), and Chair of various sub-committees. Back in the year 2000 he was recognized with a National Recreational Fisheries Award, for 25 years of contributions up until then, and he has not slowed down. He is a delegate to represent Canada and the sport fishing view in international negotiations at the Pacific Salmon Commission.  He is a director of the Tyee Club. I know I've left some things out. Much of what he does is out of view , but I think his greatest contribution is educational through his columns, and I think they should be distributed more widely.  And, oh yeah , he is a fine fishing guide.