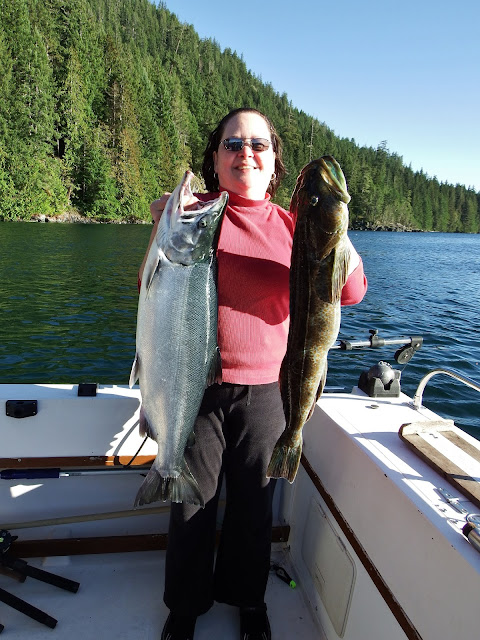 Shamra's fishing day was wonderful.  She hoped to get a lingcod, and a coho would be nice bonus. Actually, she said any fish would be a bonus on such a beautiful day on the water.
The lingcod was a just right size, and the coho a bright mature male with the hooked nose that many people call " Northerns", just about 12 pounds.
We spent some time drifting and watching the dolphins. Its hard to guess the number, but maybe 50 or more,and this time south of Seymour Narrows. They rush in a wide line pushing and corralling the herring , and then settle down again before repeating the cycle.
There are about ten sea lions that have been hanging around Seymour Narrows.  They came around the point and right close by as we drifted while jigging. 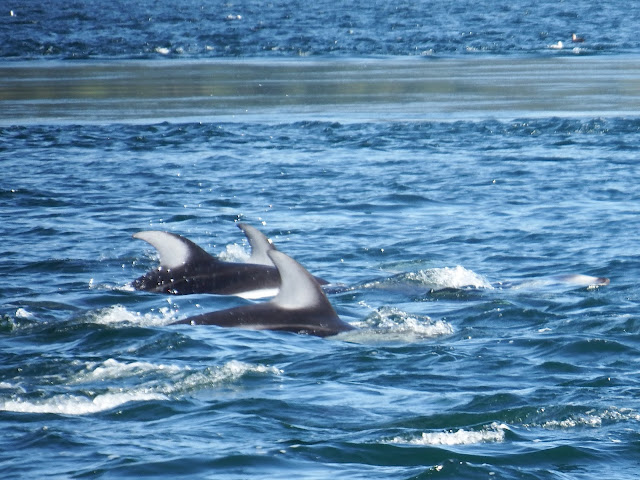 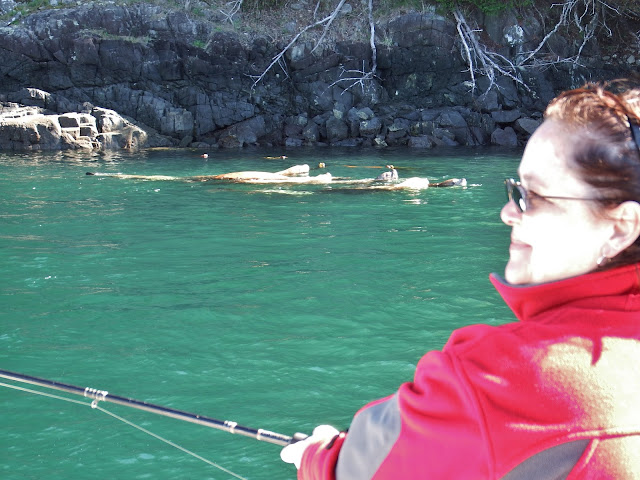 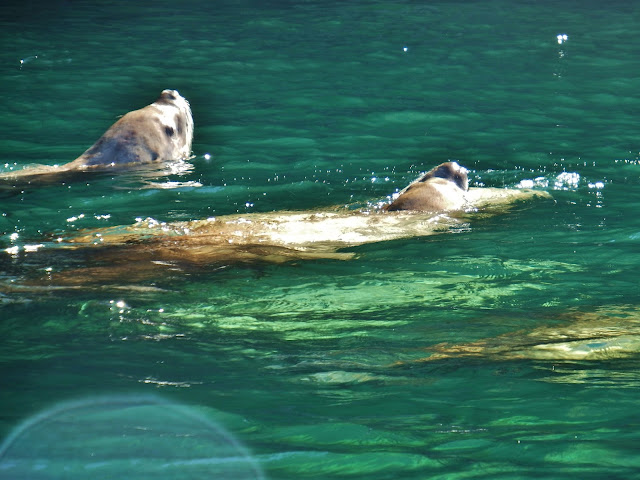 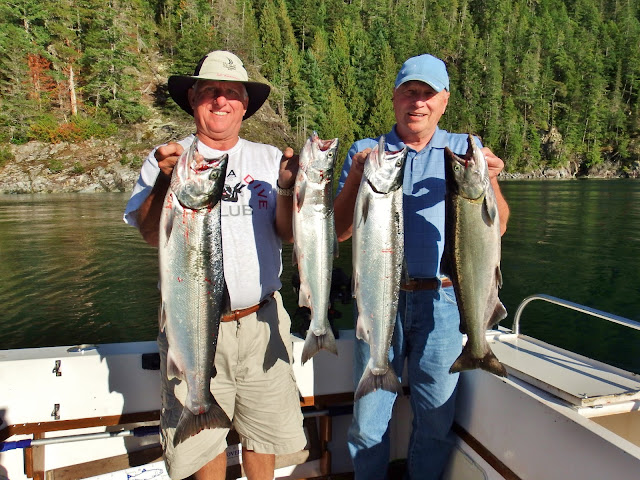 What a lovely September day. Bob and Doug thought they should get off their yachts in Campbell River's Discovery Harbour Marina and go fishing. It was an idea that came in the morning , so we left at 11 am.  We came through a hundred or more Pacific White-Sided Dolphins on the way out.  And we saw a few small schools of chum salmon porpoising as well, while we were fishing but we didn't catch any of them. On the way back we saw a gang of sealions. The fishing was pretty good, too. Some nice bright cohos and a late chinook that tried to fit in with the cohos. 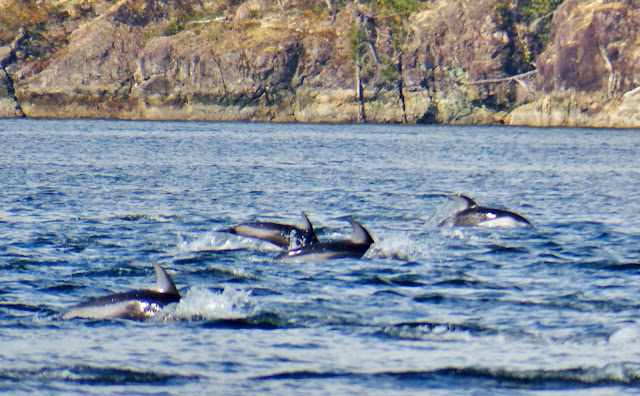 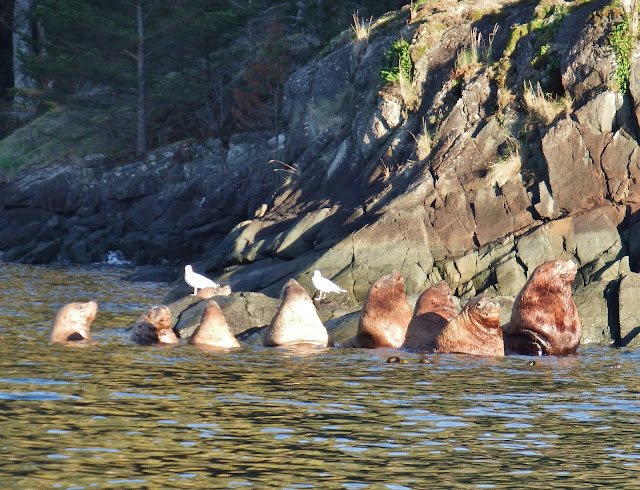 fishing with Harley and Rich 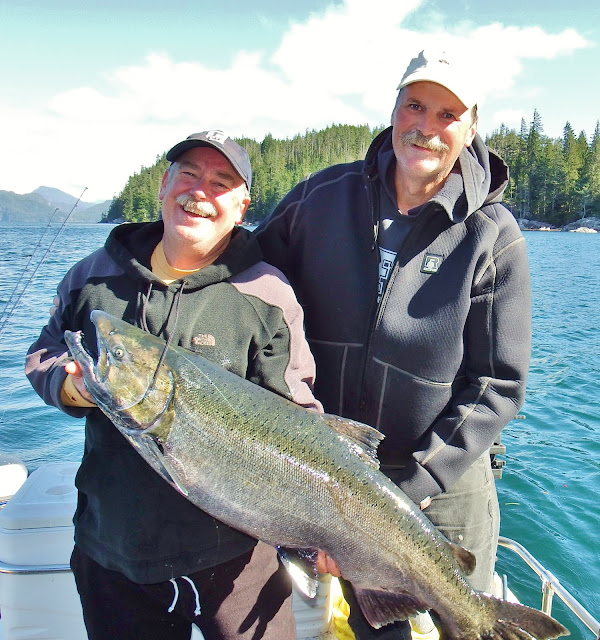 Harley and Rich asked me to join them on a fun fishing trip. It was just a great outing with old pals.
We were hoping to find some chum salmon, which will be increasing in number with their migration timing. We expected cohos as most likely, and hoped for a bonus chinook salmon. We did get one chum,  three cohos and released a couple more of those, and got lucky with this big mature male chinook, a Tyee of 31 pounds.
.
And we saw marine wildlife that was hard to get photos of.
Dalls porpoises zipped around near the boat for several minutes.
A gang of Pacific White Sided Dolphins passed by.
And two massive Humpback whales rolled by a bit further out. 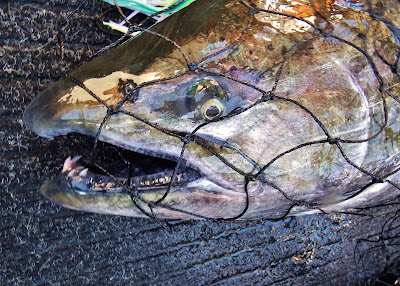 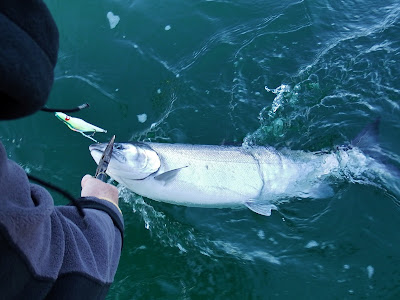 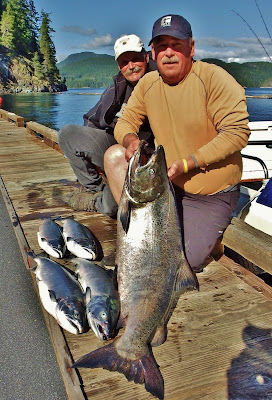 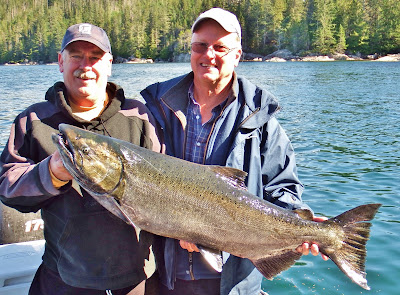 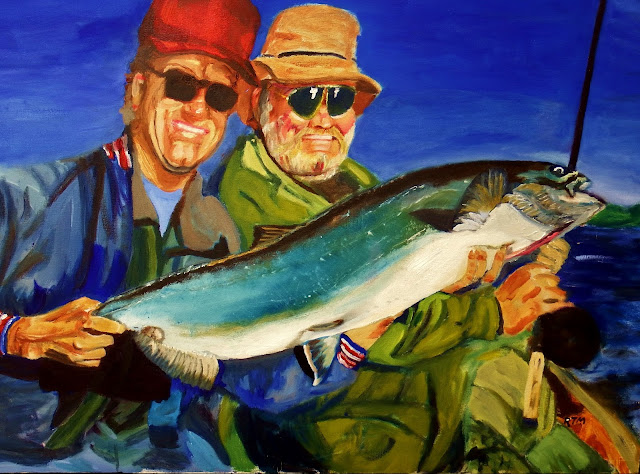 Dr Tom painted this way back in the ol' days. When he and Dee returned for a final trip several years ago, I took it to Nanook Lodge and hung it in their building. It stayed at Nanook until this summer when I brought it back.  Boy, lots of memories there.
This painting is an expression to retain  a memory, a moment of camaraderie, and an appreciation of  the salmon world.  It reinforces an idea that all those bragging type photos are often much more than just showing the catch.

Posted by Rick Hackinen at 23:40 No comments: 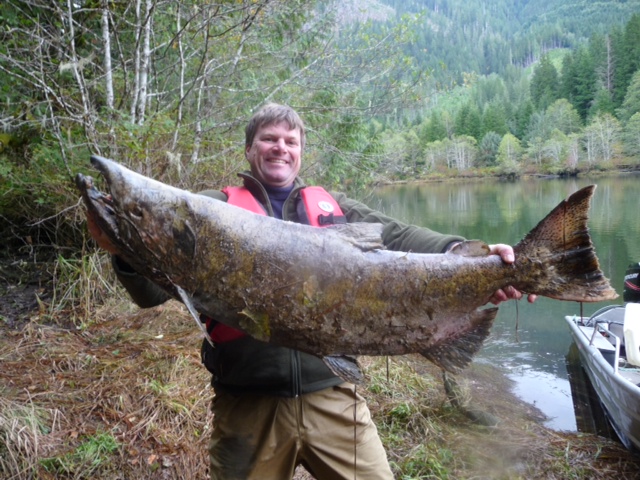 More.     We've just had an exceptionally grand return of chinooks passing through our end of Johnstone Straits and adjoining passages.  Terrific in number.
In sizes, mostly up to about 18 pounds, and a large portion of those on the small side. This is very good news. Those are three year old chinooks  and this indicates good survival rates at sea. So we can expect, or hope, that the siblings which didn't come back this year, the ones that will mature as four year olds will come back as older and bigger fish next year.
( Backgrounder ; chinooks mature at a range of ages. Most chinooks we catch are 3 or 4 year olds. Some fewer go to 5 years, and possibly more. Another few, mostly males, will mature at only two years old. All Pacific salmon die after spawning. There are complications in counting the ages of chinooks as some go to sea in the spring after hatching, while other types remain in the stream for a year before descending.)

Big.      In very interesting contrast to fish caught in the lower " Straits ", the return of chinooks to the nearby Phillips River have been big fish.  Those fish are counted in the seine netting for brood stock in the very successful Gillard Pass Salmon Association chinook enhancement project. They are returning as mostly older fish, which is likely a result of the program " kick starting" that genetic line.  Reports are of fish commonly in the high 20s, lots over 30, with many over that, into the 40s, and at least several in the high 50s.  And, in numbers this is a great return.
I had hoped to join Rupert and the volunteer crew seining in the river this past Saturday but the plan was cancelled due to rainy weather and the river blown out of condition. As well as giving a helping hand , I would have liked to have seen those fish. Rupert will have a total assessment of the run later.

I'm also excited about prospects for the Campbell River and the Tyee Club rowing next season. There was a great improvement in the fishing action in the rowboats this year. But the fish were mostly in the smaller sizes, with quite a few in the teens, and into the mid 20s, and several 29 pounders just short of the Tyee 30 pound qualifying weight. Just 15 Tyees were registered , with two in the 40s. I'm optimistic that the 3 year olds are a favourable sign of good things to come : more older and bigger fish could be in store next year.
rick@gobrightfish.com
250 830 8680
www.gobrightfish.com 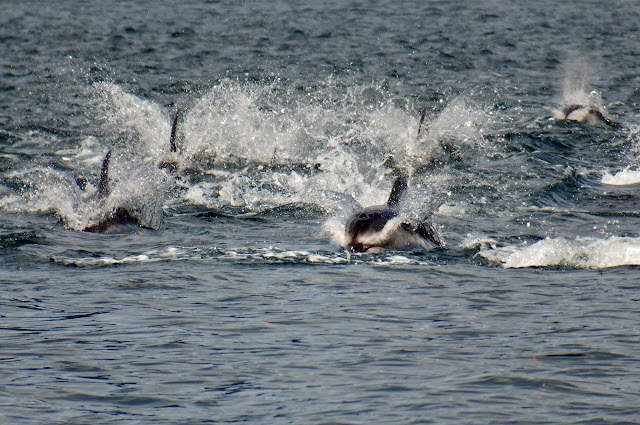 The Pacific White-Sided dolphins are fascinating. They are common to see in recent years, but they weren't here much at all in the prior decades. They are regular sights in groups of dozens to fifty or more.
The experts say that in the "Straits" they are eating the schools of small 3 or 4 inch herring by constantly herding them. I was very skeptical about this when I first heard it a few years ago, but now I believe it.  Just think of the amount of tiny herring that these numerous warm-blooded mammals must need.  They work hard for their meals.
rick@gobrightfish.com
250 830 8680
www.gobrightfish.com

Posted by Rick Hackinen at 17:02 No comments: 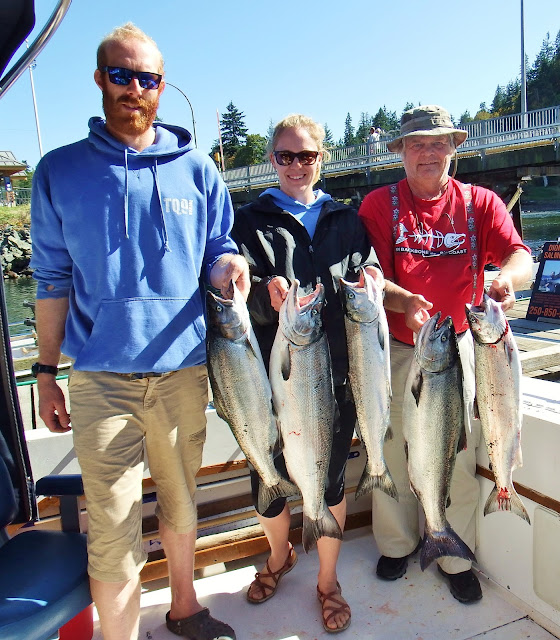 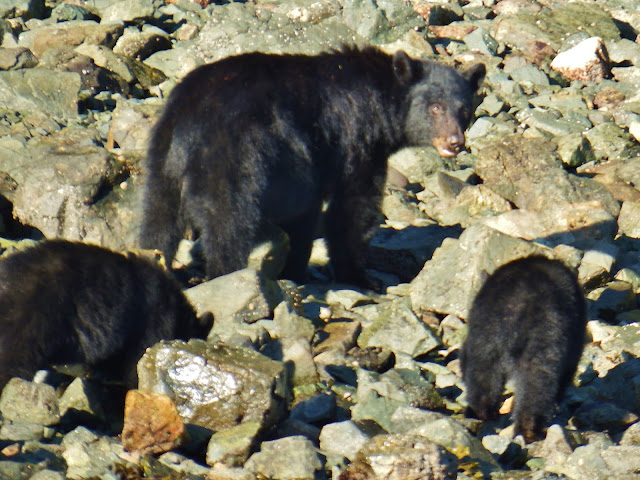 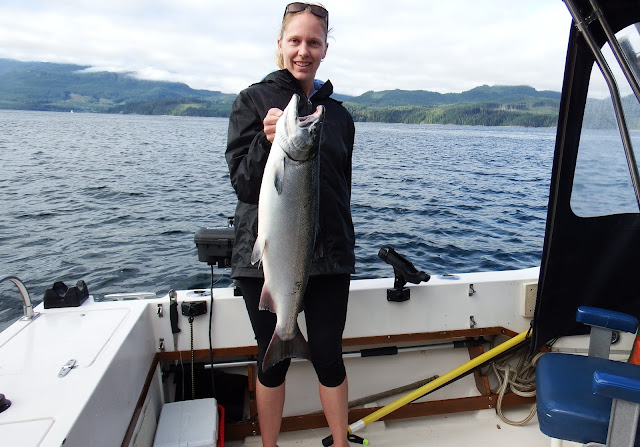 It was Katerina , the grandmother who made it all possible. She made the original arrangement and volunteered to look after the babies so Amy could go fishing.  And Amie sure made fishing look easy in front of her husband  Zeb and father David. ,   The family is staying at a vacation house on Quadra . Zeb and Amie, visiting from France, and her folks from Alberta.
On the way out we saw a humpback whale and stopped to watch it until the big tail came up signalling the start of the long dive.  Then we saw a mother black bear and her cubs on the shore. And we didn't know it , but there were Orcas nearby, but we missed them.  And there were dolphins in the channel when we were fishing.

Posted by Rick Hackinen at 10:15 No comments: 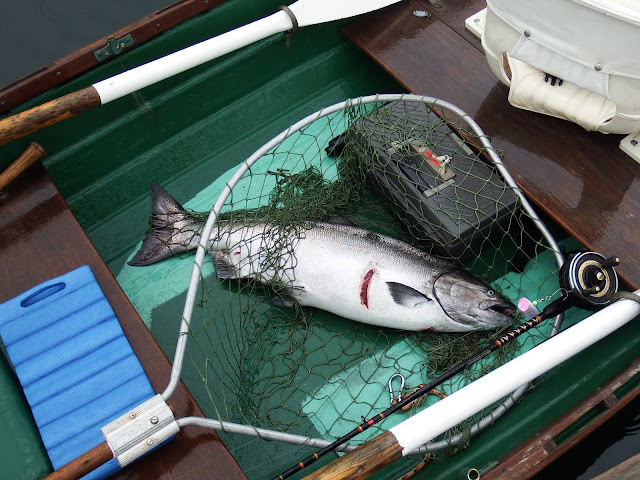 David, known as Magneto, popped this one out as the wind gusted up.  24.5 , just a bit smaller than his earlier one. These grand fish are a thrill even if they don't make it to the very special Tyee 30 pound mark.  Note the mark of a predator tooth, an Orca or maybe a sea lion. With this success we came in early. The weather was a challenge to work around this session. 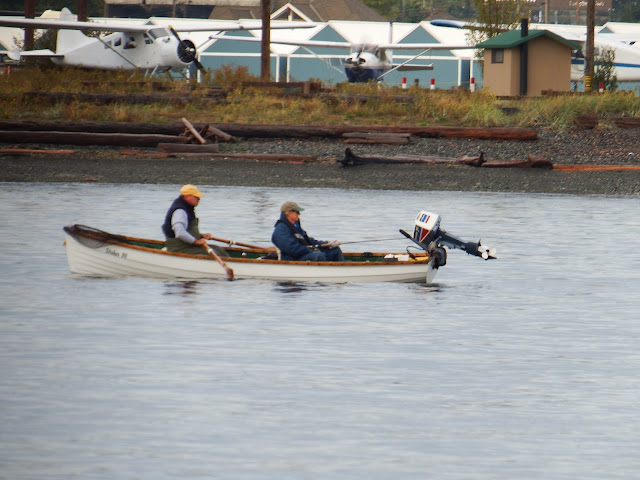 Holly with Scott.  Each looking always ready in relaxed concentration. 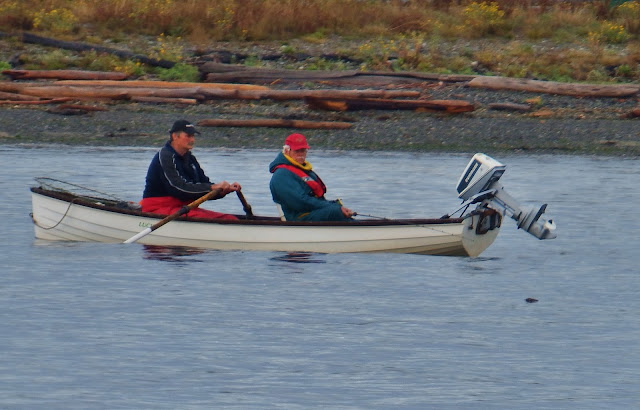 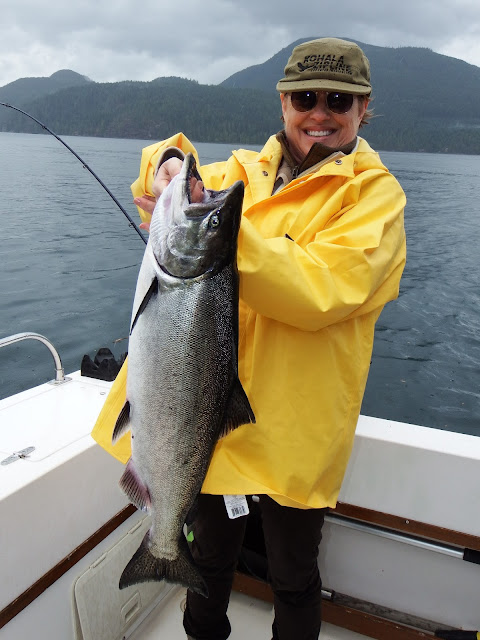 Norm and Laurie elected to go out in the motor boat instead of rowing. We found nice sheltered
conditions and good fishing , including two double headers.
( I'm of mixed mind whether to put up slice of life photos or tally the catch. Today was 4 chinooks, and released 3 cohos , one lingcod, and one small chinook, )