Three for the family 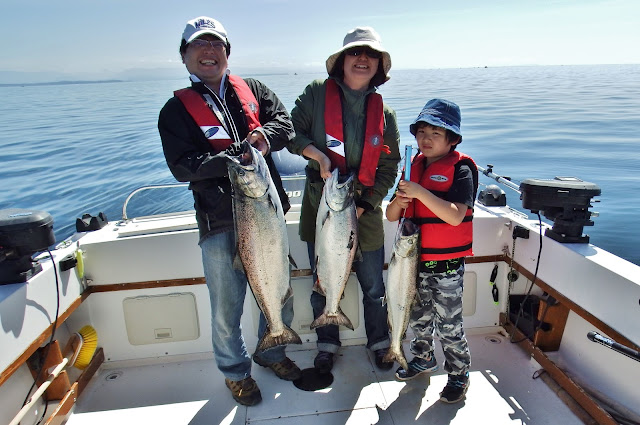 Three fish for this Japanese family. This was a trip representing  Eiji Umemera , AG Fish Enterprises.
Youngster  Taichi didn't like holding up the fish, but he loved everything else . 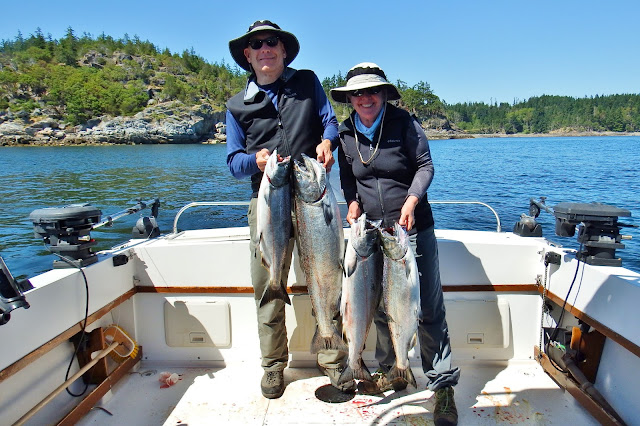 Bob and Allie , from Ohio, are photography enthusiasts who were looking for a mix of fishing and wildlife photography.  We made an overnight trip out to a unique cottage in the islands, completing a great circle route around Quadra, Sonora, Read and Cortes Islands, and back to Campbell River.  The timing and direction of the route was determined by the afternoon flood tide where a concentration of eagles put on a show feeding on hake in the ocean rapids. 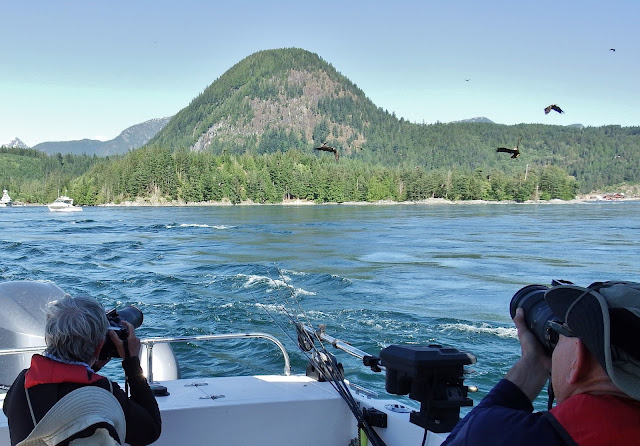 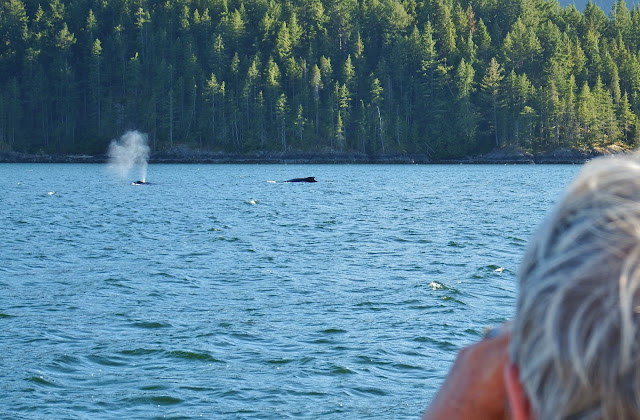 We saw humpback whales , which we gave space to, drifting with the motor off.  Bob's telephoto lens will bring them into closer view, to be showed later. 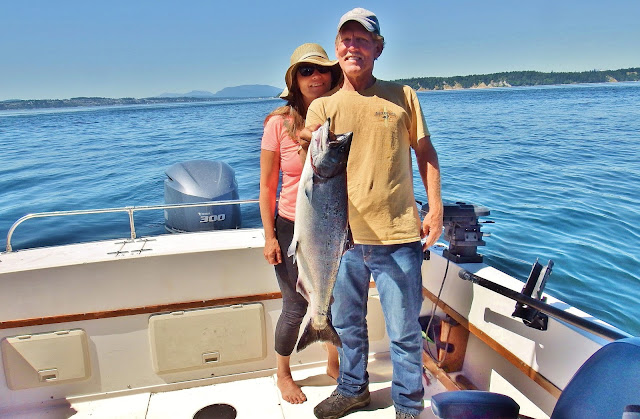 Laur and Carol came for a visit and we fit in some fishing just for fun .  And, of course,  they will love to take fish back to the Okanagan for fine dinners. We picked up Shamra to join us at about 10 am.  Easy living, great weather. 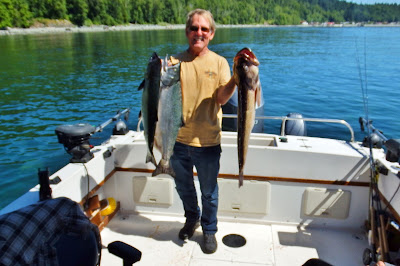 Laur caught his limit of two nice chinooks and a lingcod. Mission accomplished.

Then there is cleaning the fish, and prepping them for freezing.
A young eagle came in for some of the scraps, while his parents called encouragement from the nearby trees. 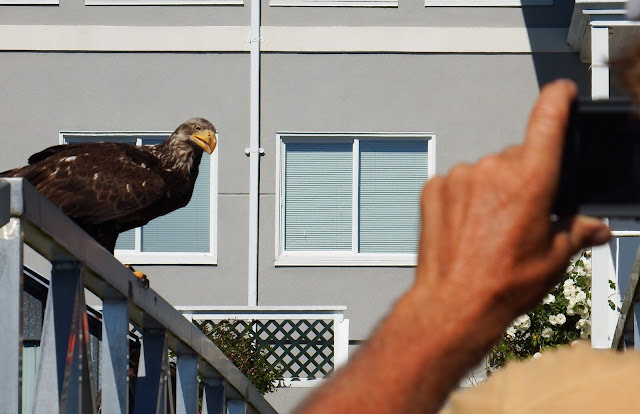 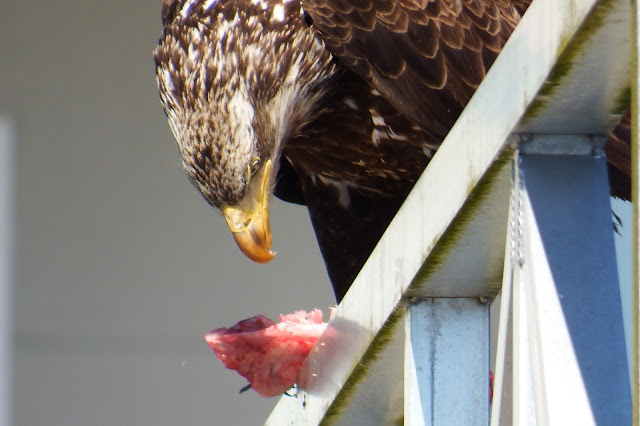 Posted by Rick Hackinen at 21:56 No comments: 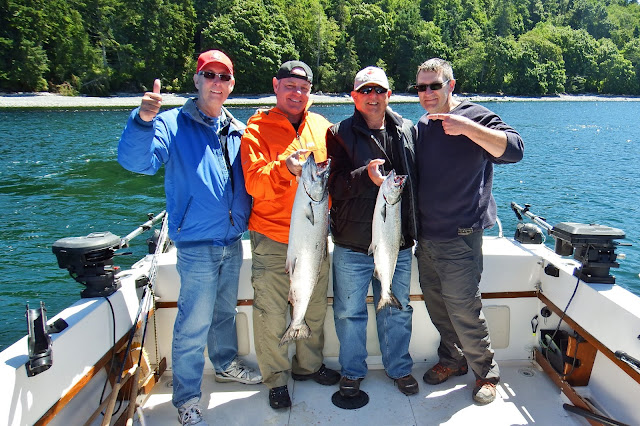 What could be better than a couple of guys taking their fathers out fishing for a Fathers Day celebration, ( just a couple of days after ). It turns out that the Dads have known each other for ,...oh, no, it can't be that many decades.
Tom, Don, Bernie, Darrel, enjoy those salmon meals and fish stories. 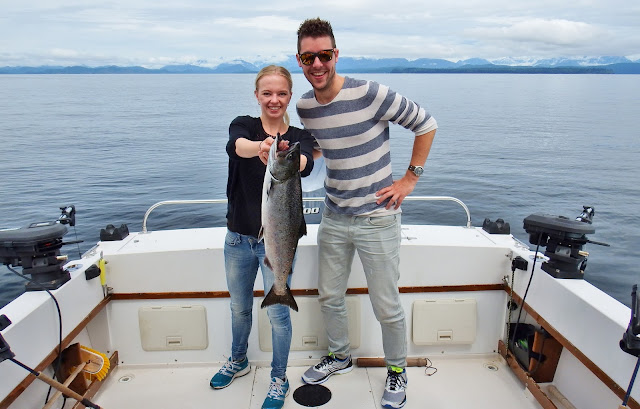 From Holland, Astrid and Ron have a fresh look at everything.  A first salmon for each of them certainly is special.  Astrid is a representative of a European travel company, and they both have an appreciation for this part of the world. 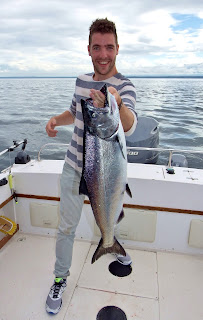 Posted by Rick Hackinen at 08:07 No comments: 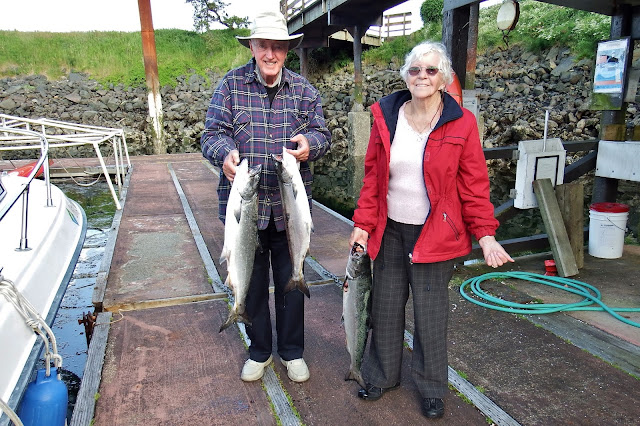 Another great two day trip for Maurice and Elizabeth.  Maurice  comes from Vancouver twice a year. In the spring with Elizabeth, and in September with his son Marc . This time they are staying at a hotel in the downtown waterfront of Campbell River. Each day begins with a solid breakfast and we always take a break and come in for lunch, this time at one of the floating cafes. 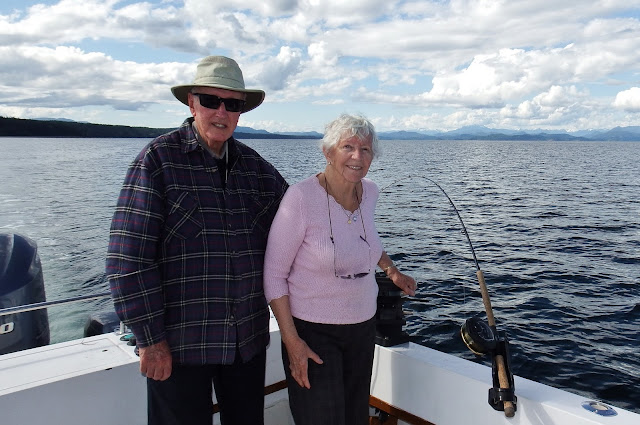 Elizabeth thought the view was so nice that it was worth a photo, so I added the two of them. 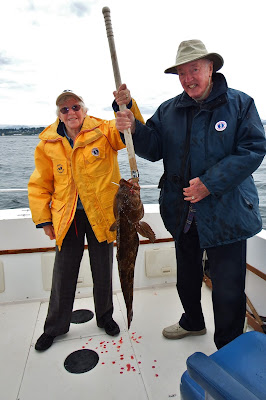 See you in September, Morris.  See you next June, Elizabeth.  Keep your health.

another great trip from Napa 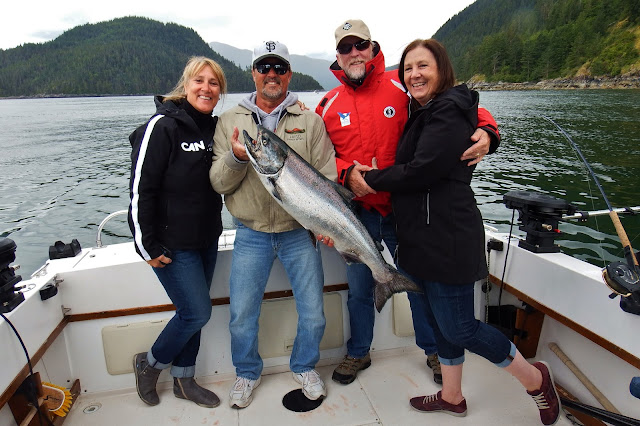 Rebecca, Chris, Bruce and Becky share the experience.  Four in the boat, or three, or two, or two boats.  Taking a break from winemaking, or construction, they are all loving this corner of the world, again. 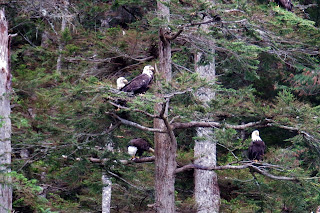 Sonora Resort is the choice of lodging for this trip, with it's luxurious accommodation and attention to detail in all things, from fine food to attentive service.
Sonora is also located right on the edge of a series of ocean rapids that has to be seen to be believed.  On the big flood tides the turbulence boils up hake to the surface where scores of bald eagle swoop down to snatch up their dinners. The eagles are often so numerous they are hard to count. If there are about twenty in the photo below, there are four or five groups like that right close by. Eagles generally spread out along the coast, but where there is lots of food they don't mind lots of company. 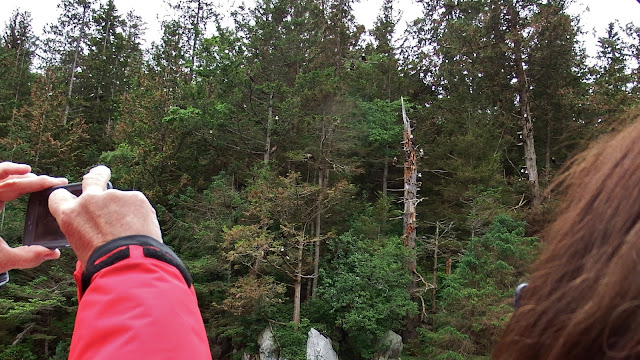 Here's a story I would be reluctant to attempt to repeat.
On the last afternoon , all four came out for the trip.  Fishing had been slow,, so when Chris hooked into a strong fish , it really got everybody's attention.  When the fish rolled near the surface at a distance, there were exclamations, and someone said " That's gotta be twenty pounds ! "   With theatrical authority  I said "  nineteen ..........and a quarter. "
When it was in the boat , as I was picking it out of the net , Rebecca asked , " Now what do you think it weighs ? "  I answered " nineteen........and a quarter . "   Of course there were some guffaws, so a one dollar bet emerged.  Rebecca took the bet with a wise strategy. " Okay, nineteen and a half "
On the scale at Sonora , Rebecca was exactly right.  Rebecca took the photo below with Chris accepting the winnings. 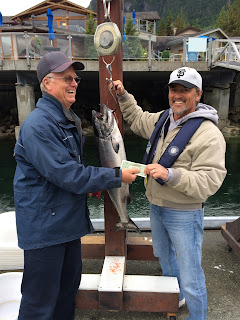 We really saw the county on this three day trip, with fishing trips north to Denham Bay , northeast into Bute Inlet, southeast to Toba Inlet, and south into Georgia Strait.  To begin the whole trip, they flew into Campbell River and we started with our cruise up the east side of Quadra Island and to end it all we returned by a circle route down the straits on the west side.

Travel well, see you next year ! 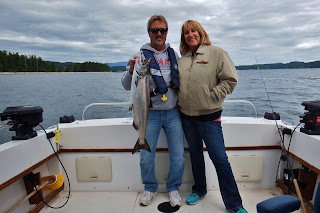 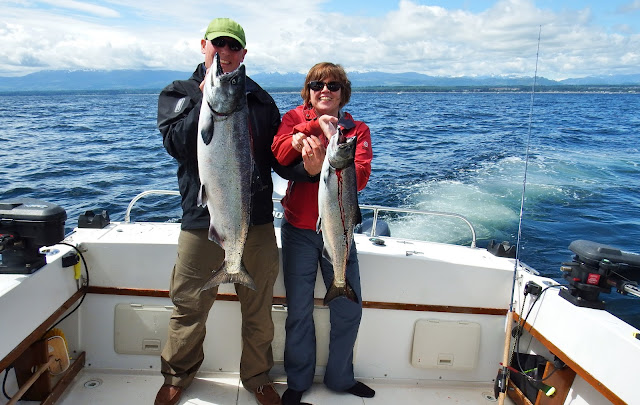 It is so good to do this again.  Andy and Catherine , from Vancouver,  are becoming regulars, and we all enjoy the days very much. A double header adds to the excitement.  This was a two day trip, this time staying at the newly available Loon Point Cottage in Quathiaski Cove, a very lovely spot where you can be picked up at your own dock. They are looking forward to many salmon dinners, and lingcod as well. Dave and Katrina are rewarded for their patience 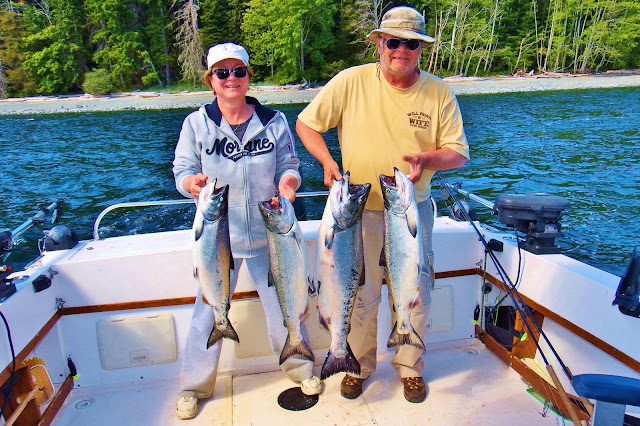 For a while there it looked pretty slow for Dave and Katrina .We tried a good spot, and then another , then moved again. Three and a half hours without a bite. Then another move and we found a busy patch.  Whew.
Dave and Katrina, and other members of their family have been coming , from Alberta, for a few years . They know how fishing is, but luckily, it has always turned out well in the end.