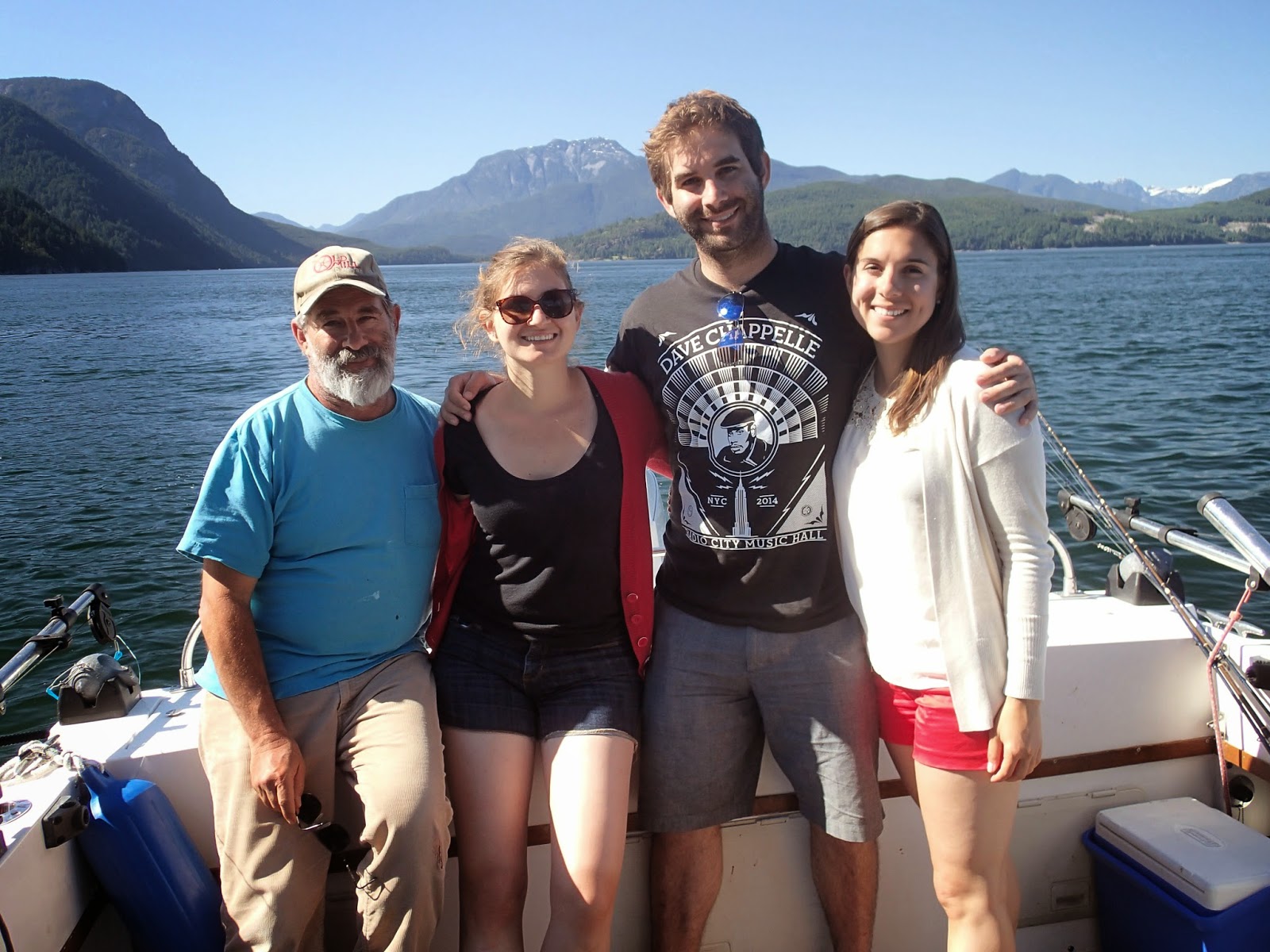 Randy wanted a place that would be fun and interesting for his whole family;  that is his wife, and adult children, and their partners.  A reunion of sorts, from California to New York. as the next generation spreads out in the world. And wanting good, interesting fishing as well. 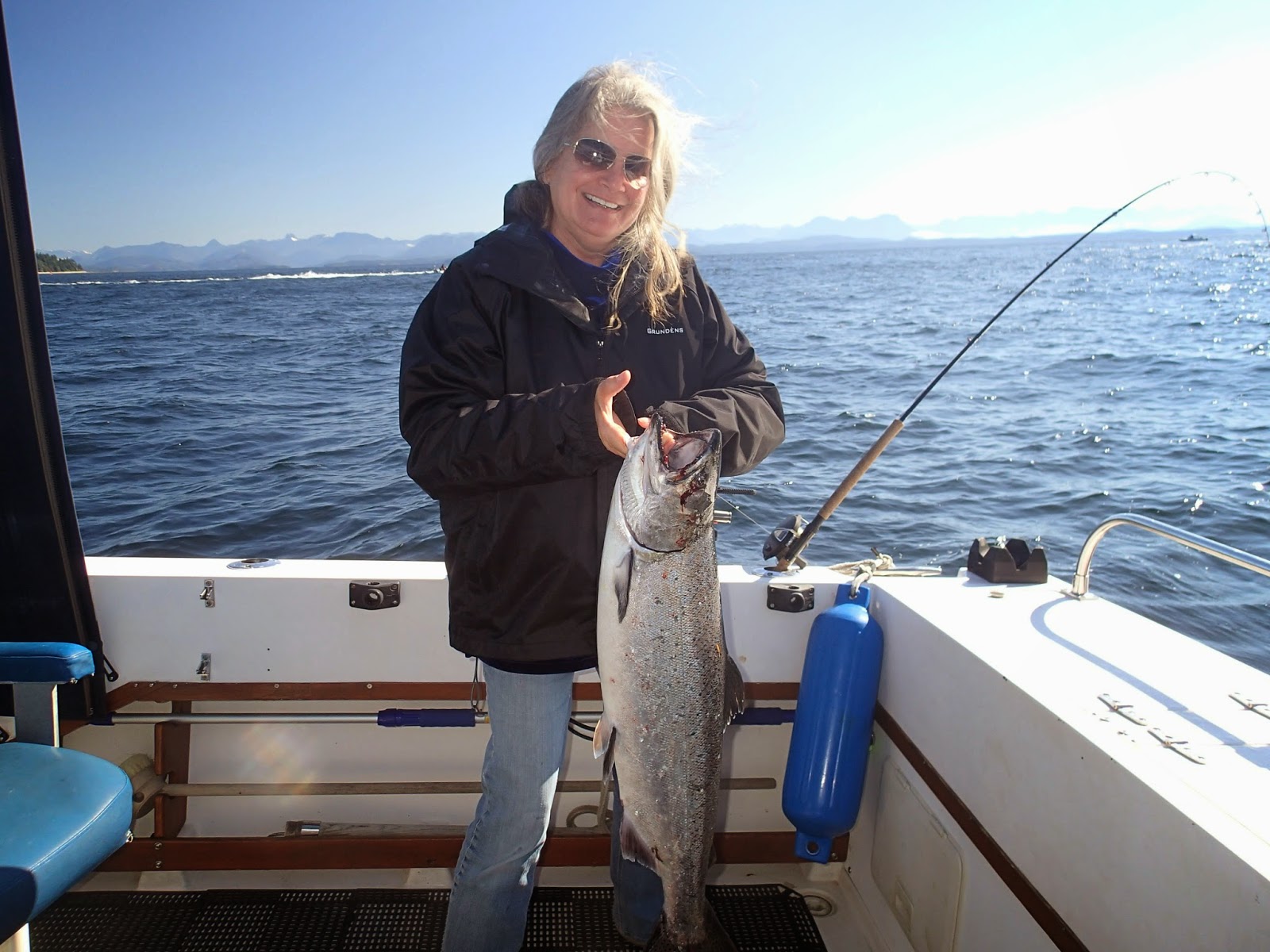 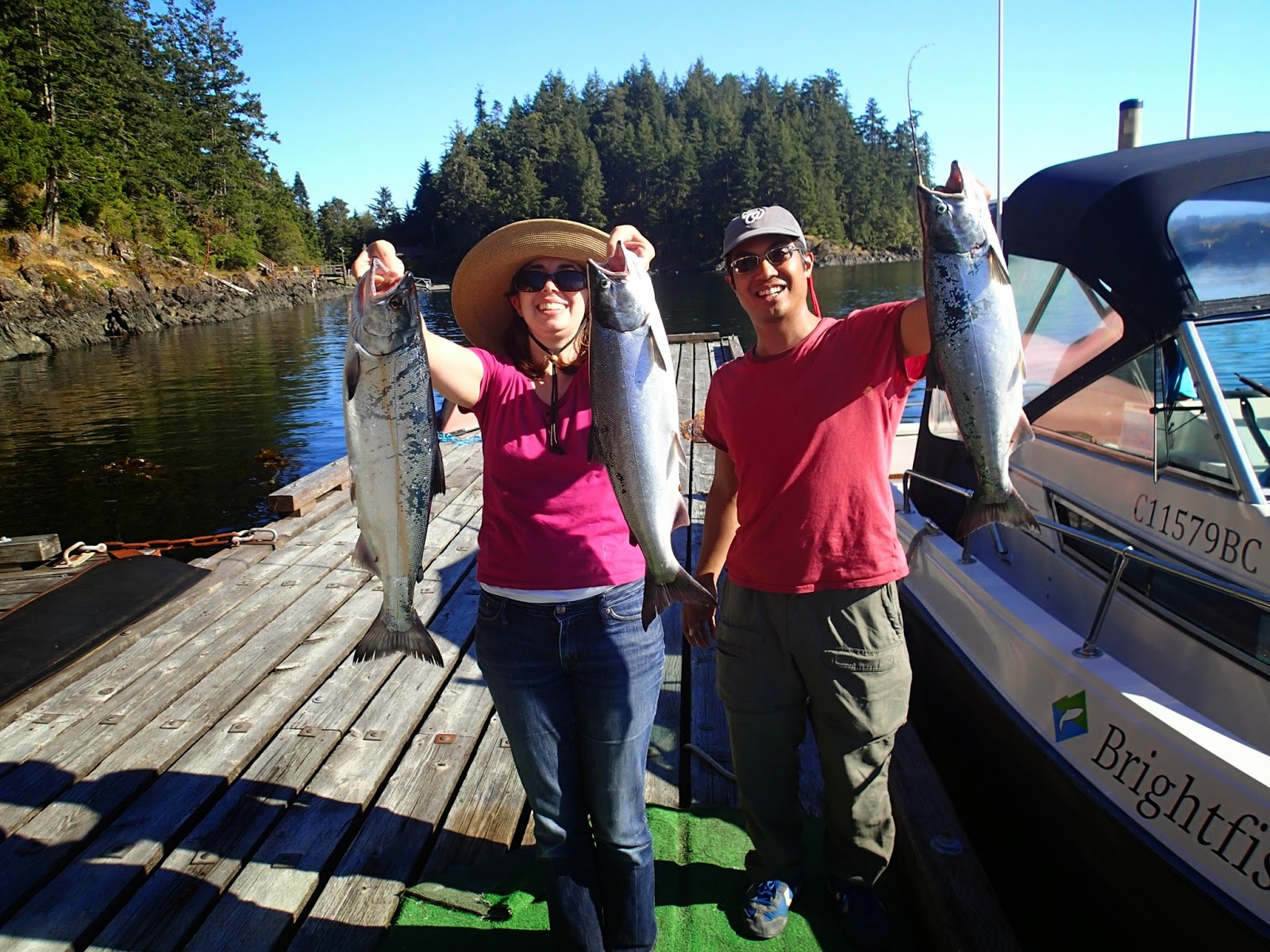 Eric P's April Point Guest House suited his crew very well, and ,as a bonus, it has a dock.  4 bedrooms, ensuite bathrooms. A really good fit.
The family stayed for 4 days, and fished for 3. Each of the fishing days was broken up into two halves with different combinations of family members.  The last afternoon was no fishing at all , with the priority being daughter Rebecca's desire to see the sights rather than fish, so we circumnavigated Quadra and Read islands, getting a bit of a view of the mountains from the mouth of Bute Inlet, and Calm Channel.
I have to admit that the young folks found their own activities to suit themselves. They enjoyed kayaking with Quadra's Wildcoast Adventures. They hiked to Newton Lake. A walk on Rebecca Spit. Some had massages at the April Point Spa. For one special night , the whole family went to Gowland Harbour Resort for a lovely gourmet meal to celebrate Karen's birthday. There were good activity choices for both the active ones and the lounging ones. Their own fresh-caught lingcod made a couple of self- cooked dinners.
Most of the fishing was in the well known near waters, deep in Georgia Strait, the Green Can, the Hump.  But we did get out to the outer islands one very calm afternoon and fished in the shallows where we found a concentration of cohos and a small spring.
On the last morning, Randy and Joe got a look at the north county and we fished close up to the granite cliffs and shore where the bottom falls off immediately to 150 to 300ft of depth.  We caught some different salmon there, mature migrating cohos and chinooks of different stocks than the ones that are biting so well near Campbell River town. 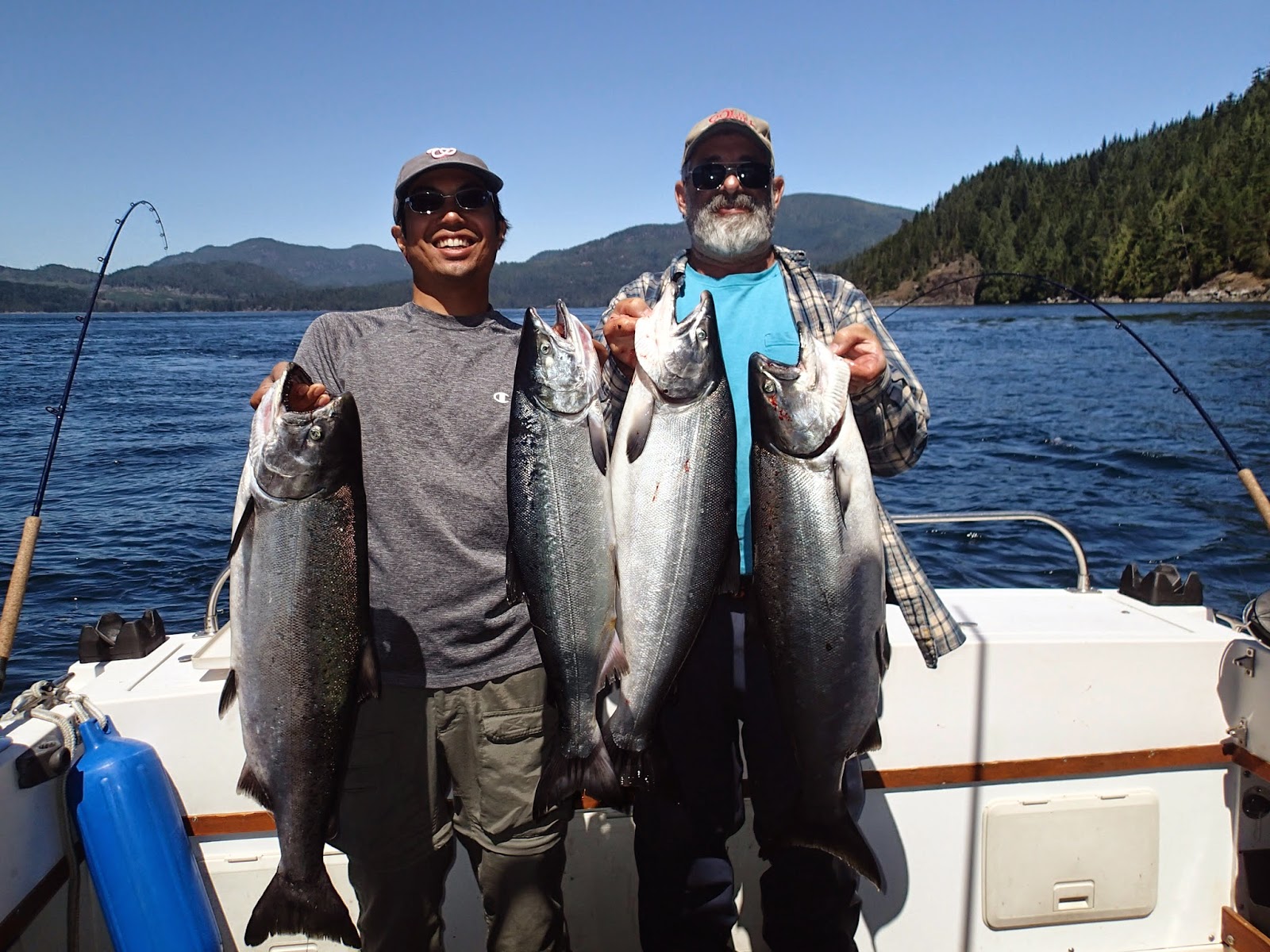 The chinooks were of the semi stubby nose type probably from the Thompson Plateau of the eastern Fraser River watershed. But the real stand out was the 12 lb coho, looking like a late summer or fall " Northern " with a curved over nose and mature milt sacks. -A true summer run coho, so different than what we have been catching just a short distance south. As usual, we took bio -samples of all the fish and I think it will be very interesting to find out if the DFO scientists will be able to identify which rivers these fish are going home to. 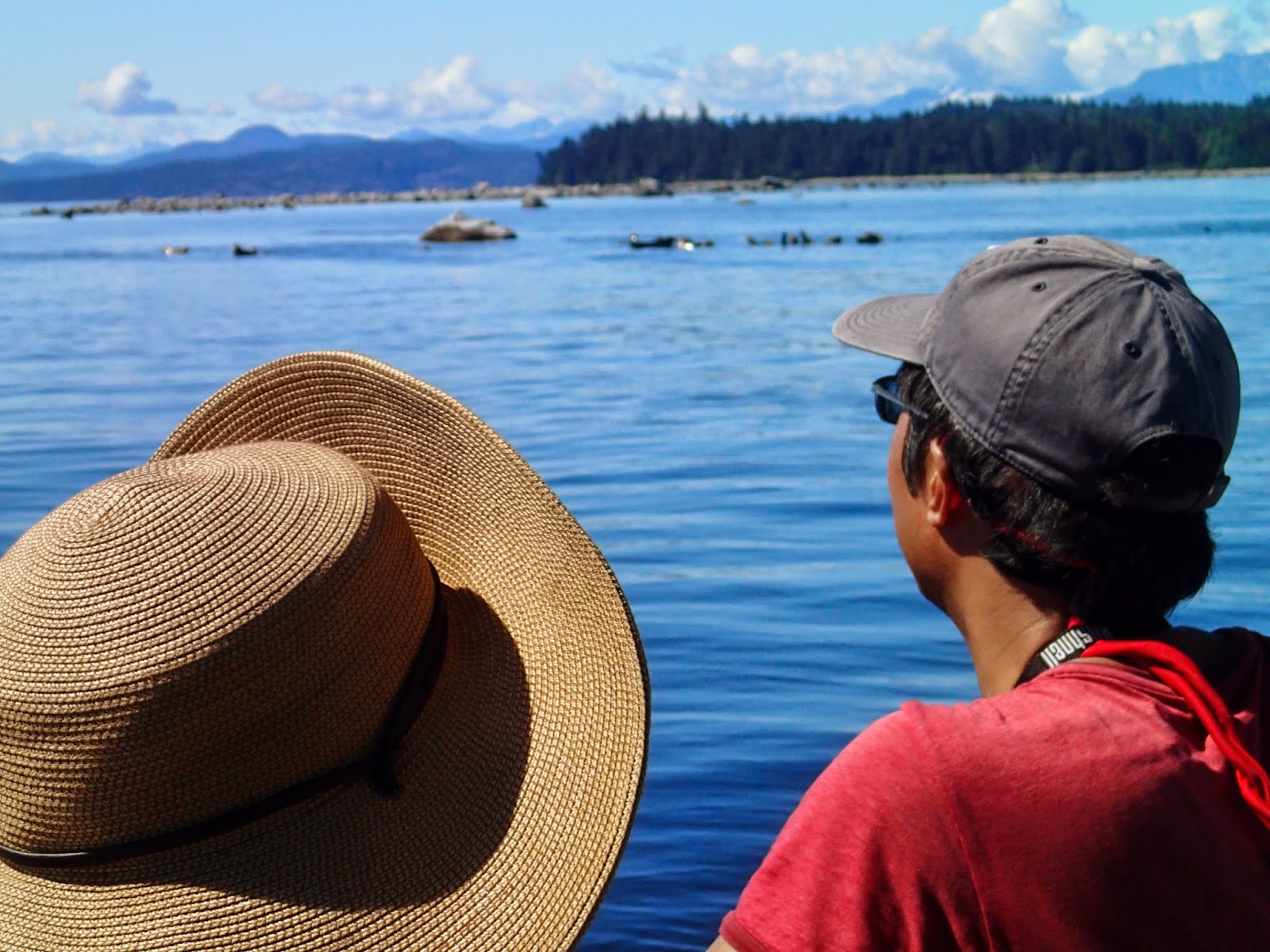 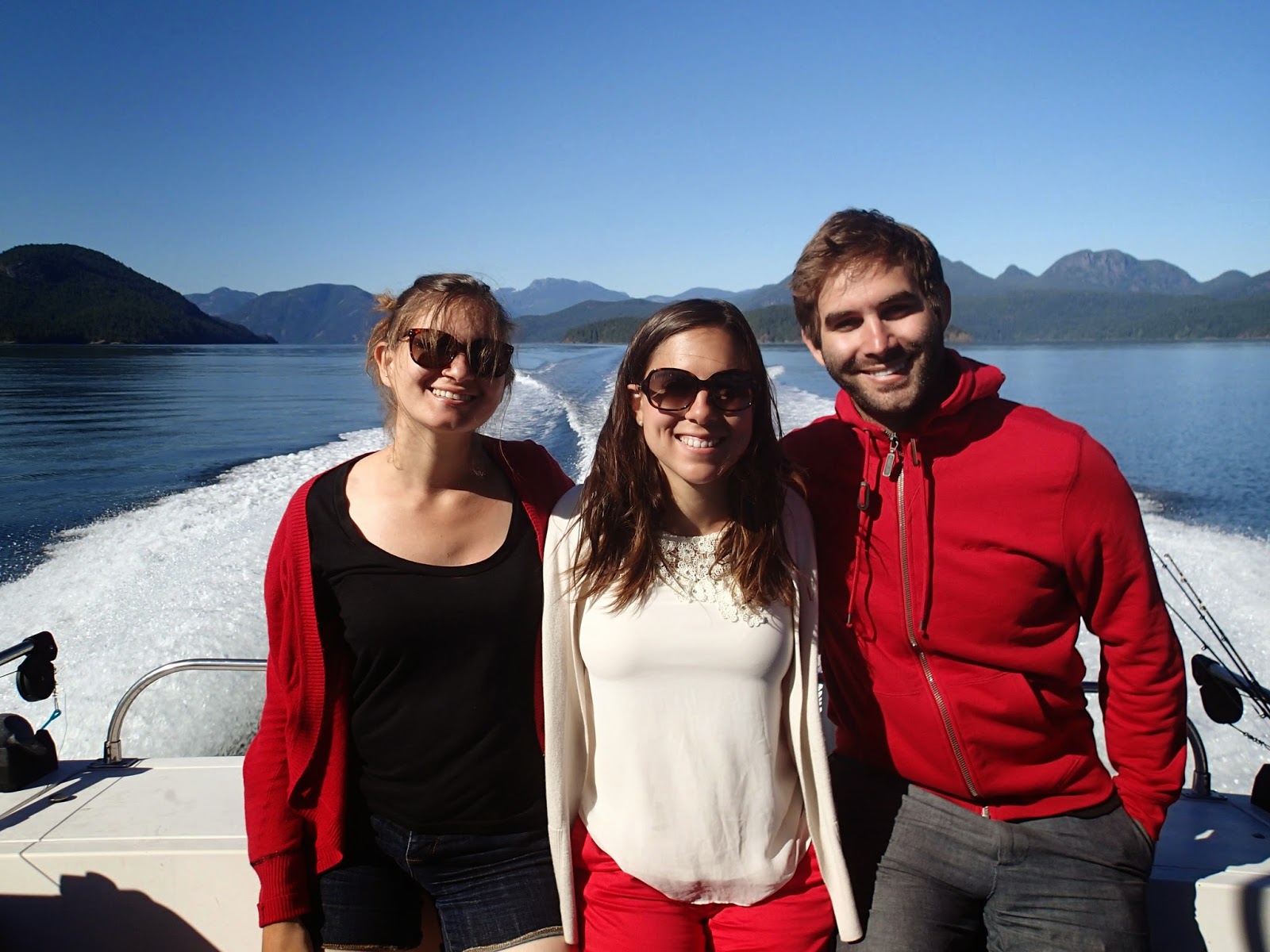 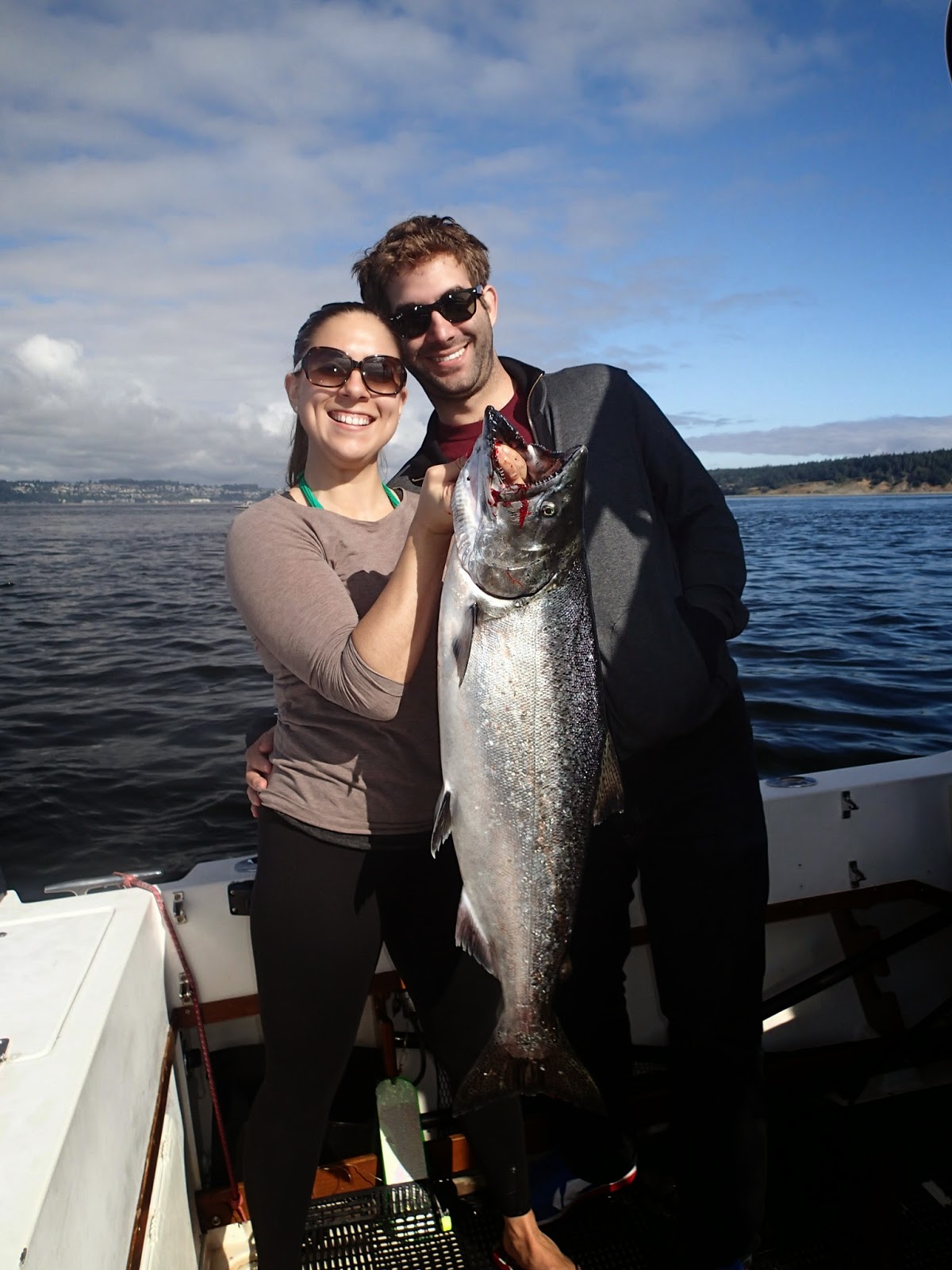 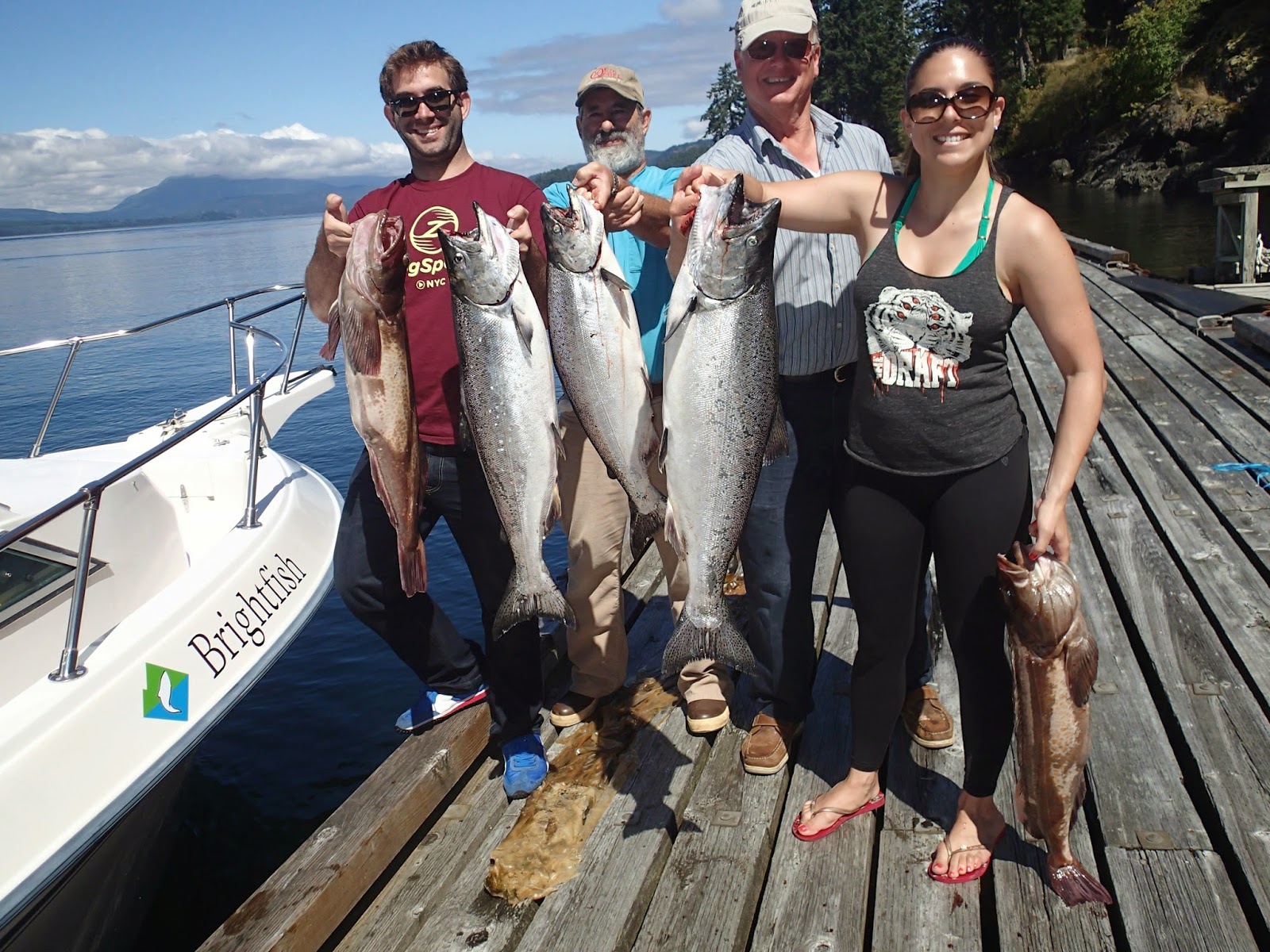 See you next year ! 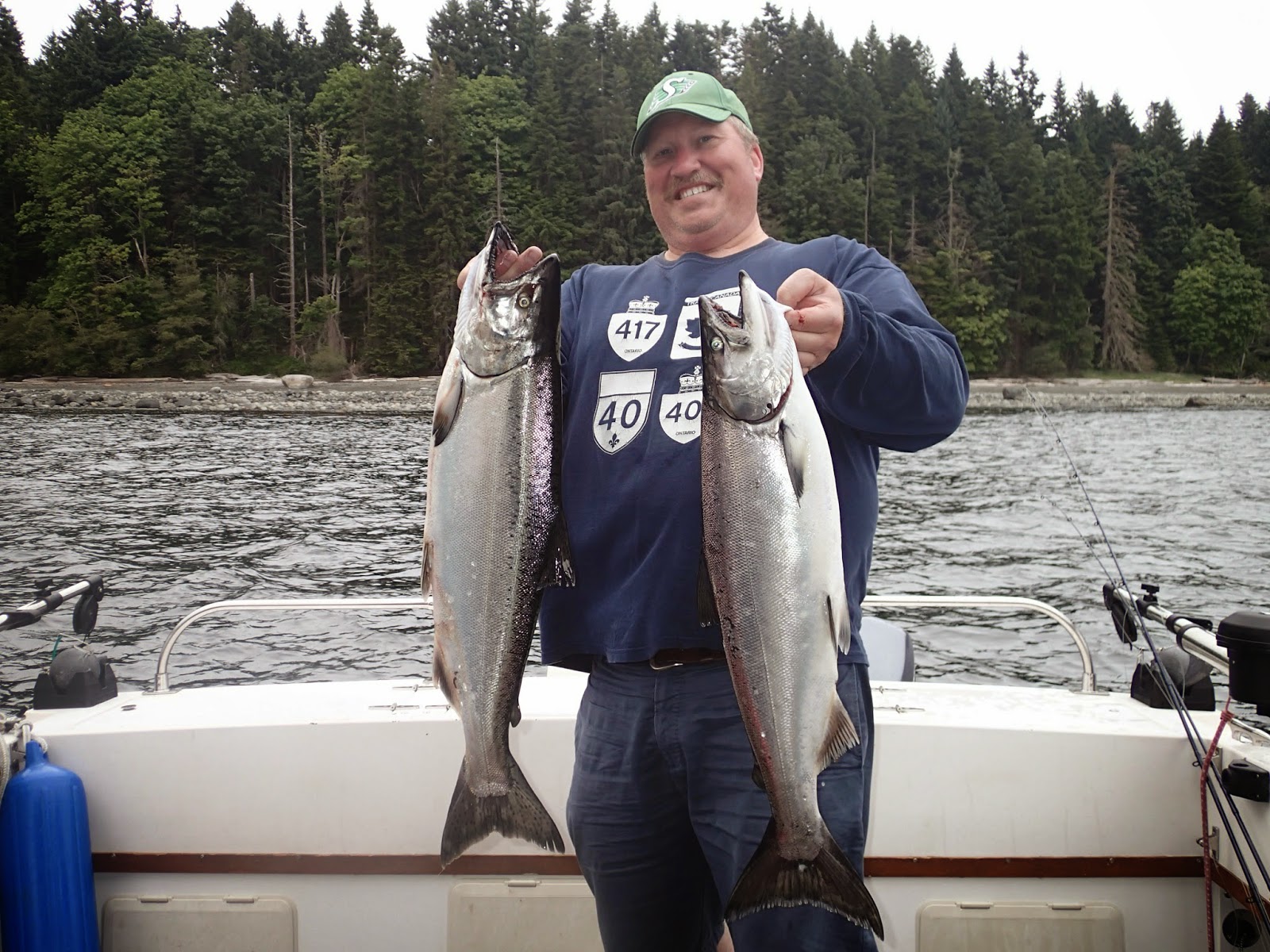 Curtis phoned me from the Quadra holiday house. I told him I'm booked up for other days, how about today, at noon, two hours from now ? Okay.
With just one angler, there is an important division of tasks. Curtis learned a lot about how to run the gear in short order while I steered , or we took turns.  The wind was coming up and steering became more of a priority. He caught on and when the fish bit, he got the hang of how to play a fish. There was one that pulled harder and faster than the others, but it came off, only re-enforcing the saying that the big ones get away, but no matter, that's part of the game. It was a great afternoon of fishing . Now, lets get these fish cold and home to the prairies. Salmon BBQs coming.
Posted by Rick Hackinen at 21:38 No comments: 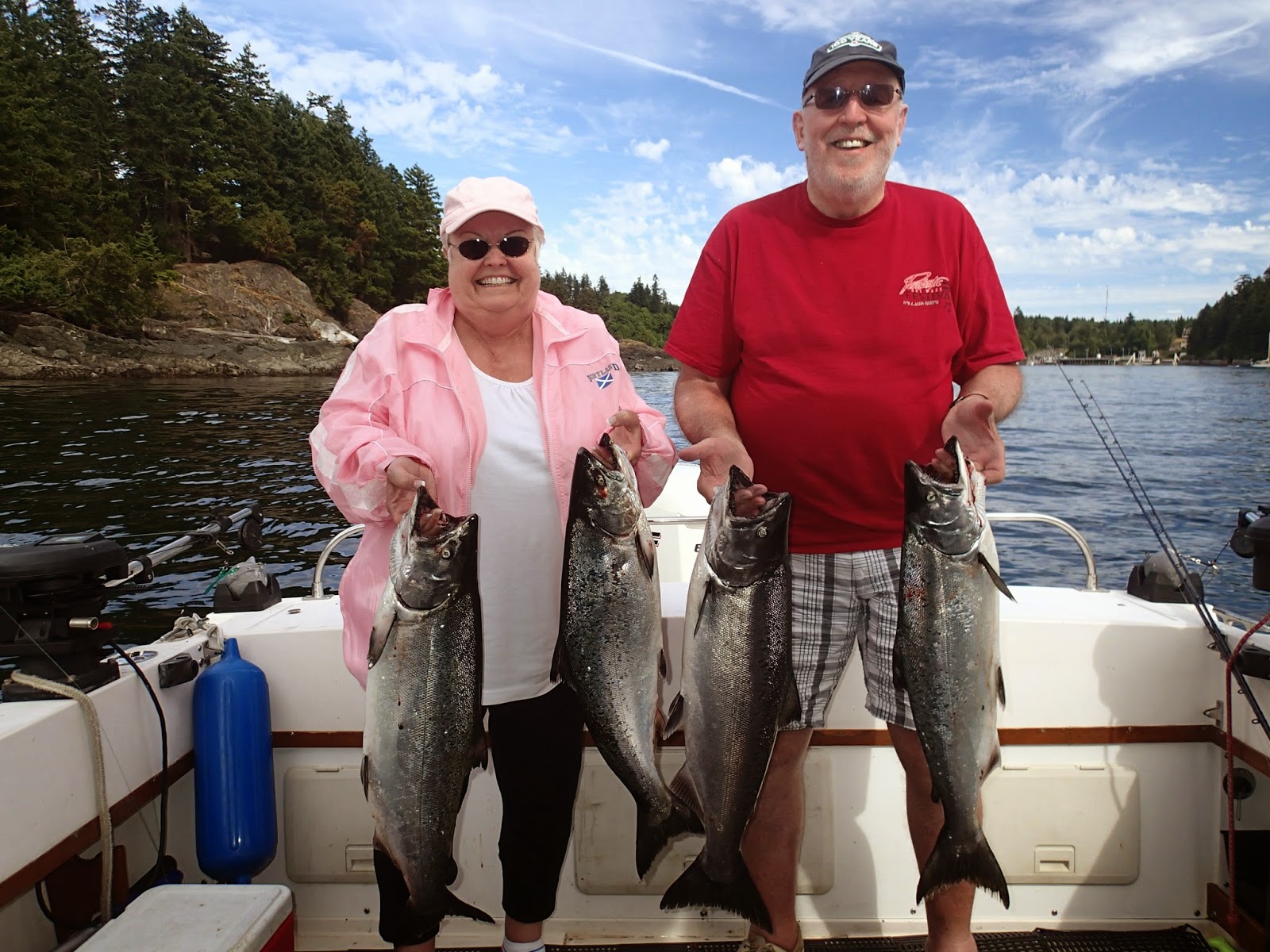 Michael and Beth hoped for good fishing. What they didn't expect was hot weather. Calm and hot. Many water bottles and slathers of sunscreen. These folks found it hot, and they come from the Okanogan ! We have fished together over the years from decades ago, and it was very good to reconnect.

Posted by Rick Hackinen at 17:44 No comments: 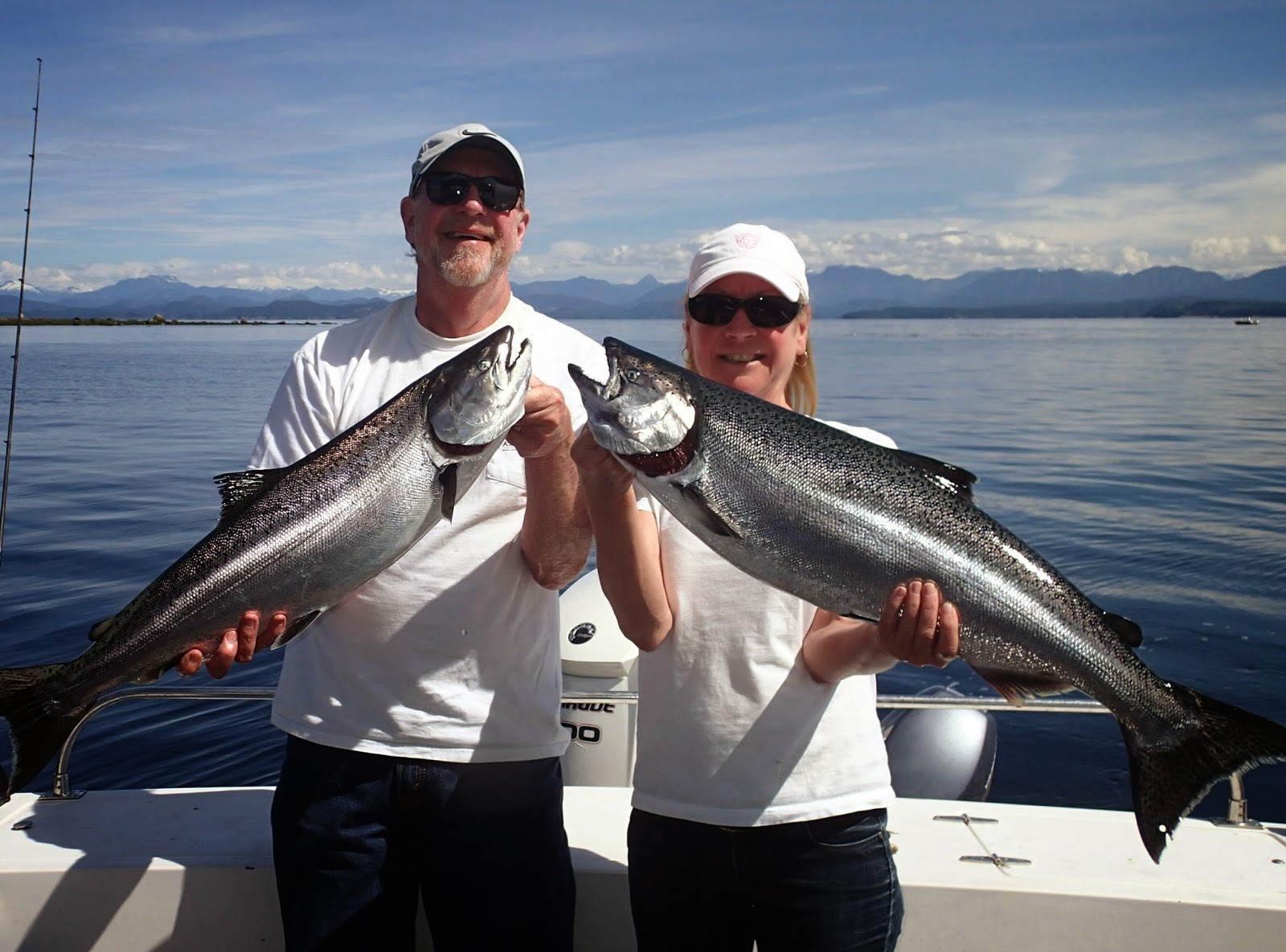 T and J are light tackle enthusiasts. I brought out the extra light rods: a pair of #8 flyrods . It is equipment you might think more suited to fishing on a trout lake, and it makes all sizes of fish look good. This is the light end of bucktail style gear, usually associated with coho fishing. We're fishing in shallow water, fishing behind the boat not under it. We're targeting both chinooks and cohos, but the chinooks come in all sizes, and hoping to repeat the 33# that T got one year, on the light rod, and has a print on the wall as a reminder. 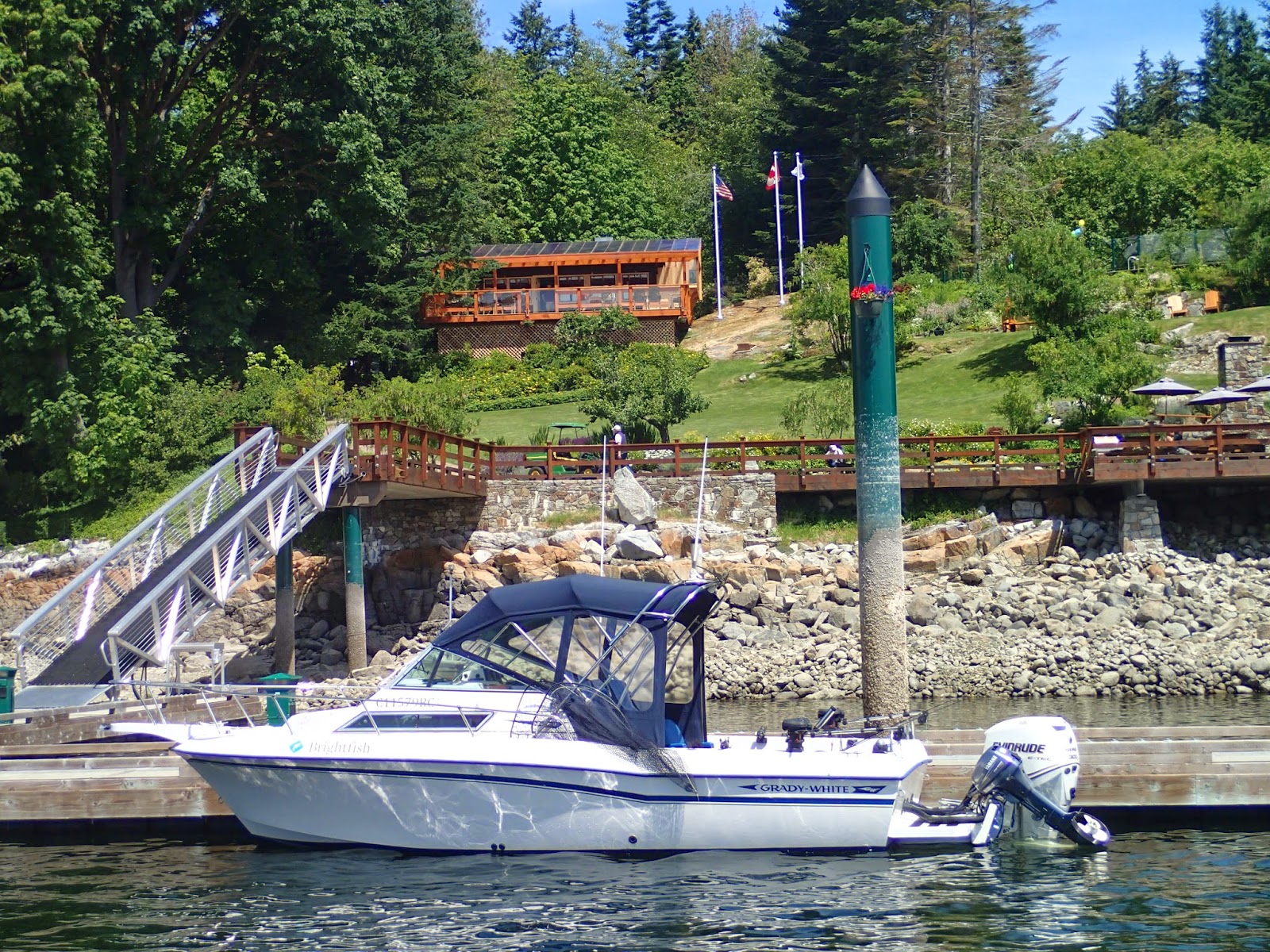 We stopped in at Gorge Harbour Marina for lunch. The owners have done a lot of great improvements to the marina and the grounds over the past few years, and this year they've renovated the restaurant deck.  It was a great lunch in a great location for a bit of island hopping.