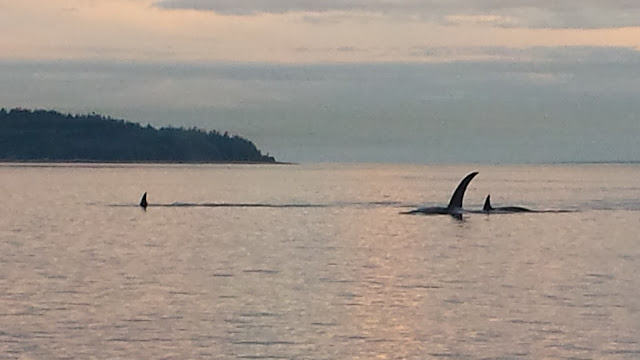 It is good form to go slow and look both ways for coming traffic when coming out of the harbour.
This family of Orcas was coming up the shore , close in, when I was about to cross Discovery Passage, almost 9 pm Friday night.  I stopped and turned off my motor at the breakwater at the Discovery Harbour entrance. 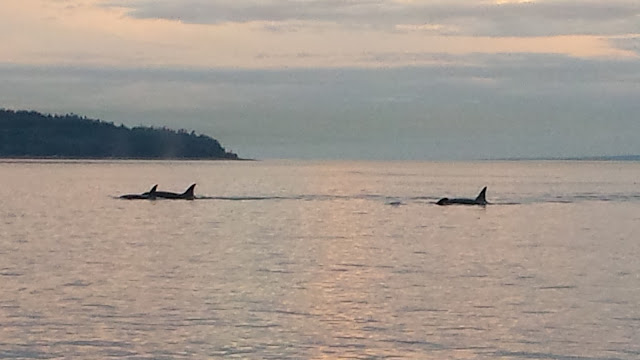 We are supposed to give them lots of room, like a hundred metres, but I was just in the harbour entrance and thought it should be okay. They passed by travelling slow and steady. The biggest male has an especially forceful blow.  I had an eye in the camera and found it hard to count them accurately. Maybe there were seven or eight , with the majority being small ones.
These are the mammal eating kind of Orca, formally called Transients, now Bigg's, prowling for seals and sealions.

Posted by Rick Hackinen at 20:40 No comments: 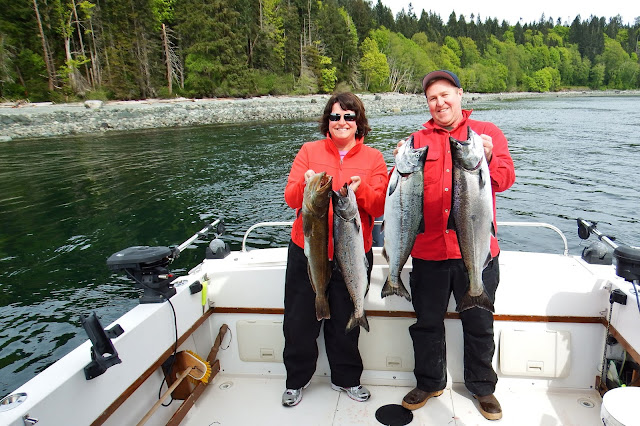 Al's birthday is the excuse for a getaway for Al and Holli.  They've come up from the American side of the Strait of Juan de Fuca , not far from Victoria really, to see what;s up with this Campbell River fishing that they have heard about.  Al has been a skipper for big sportfishing boats in Alaska and Hawaii.  (Yikes, no pressure here.)  It was a fine day for all. Those early fish are going to be so tasty. 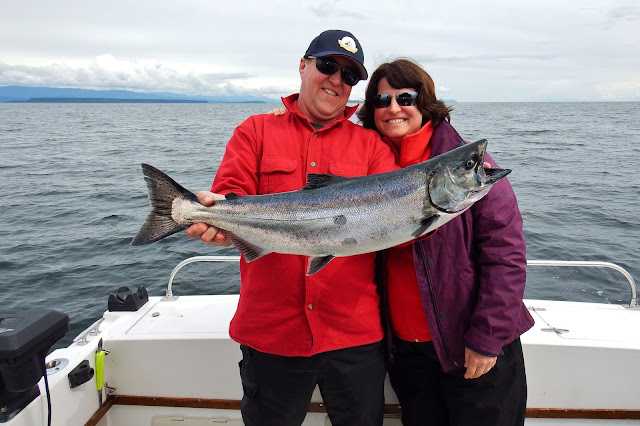 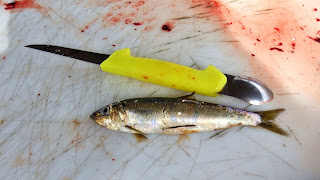 Here's a 7 1/2 inch herring from the stomach of one of the fish. That's good stuff for growing chinooks .  We've see the humpback whales again recently, probably because they are chowing on the same big herring. 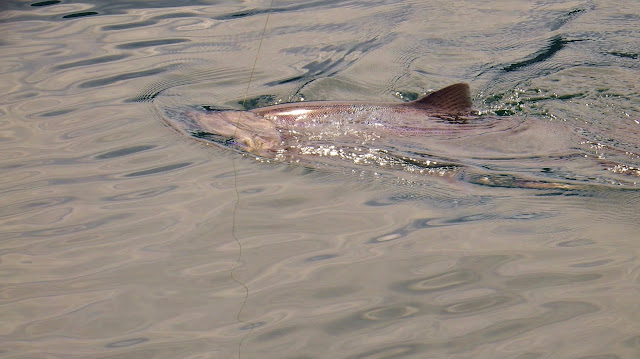 I attended the Avid Anglers AGM again this year, and again it was so full of interesting information that I have only enough time to hint at in this post. Avid Anglers is the group of volunteer anglers collecting tissue samples from chinook and coho salmon for DNA analysis to find which river stocks of salmon are about and how they move and live.  This is fulfilling  "citizen science".

Some of the things that have been learned over the years is how the stock composition of fish caught in Georgia Strait varies form north to south within the Strait.  Also we have learned that stocks from the mainland side , which are more remote rivers, have been larger contributors to the catch had previously thought.  And on the Vancouver Island side, showing that those rivers contribute greatly to the recreational catch , resulted in addition funds and production to the Puntledge River hatchery.

We also learned that there is growing scientific data to support the local observation that seals and also sea lions, are eating a lot of salmon.  The rapid grow of seal in Georia Strait for several decades has now leveled off at about 40,000 seals. Perhaps the Orcas ( Killer Whales ) are having an effect, or they might have reached the limit of their food supply .  They eat salmon when they are in schools of tiny young fish, and when they are adults returning to the rivers.
.  At any rate, it is estimated that seals ,with sea lions , are eating about 5 times as much as they did in the 1970s.  And eating about twice as much as Orcas.  And eating about 6 times the recreational catch.

Posted by Rick Hackinen at 07:28 No comments: