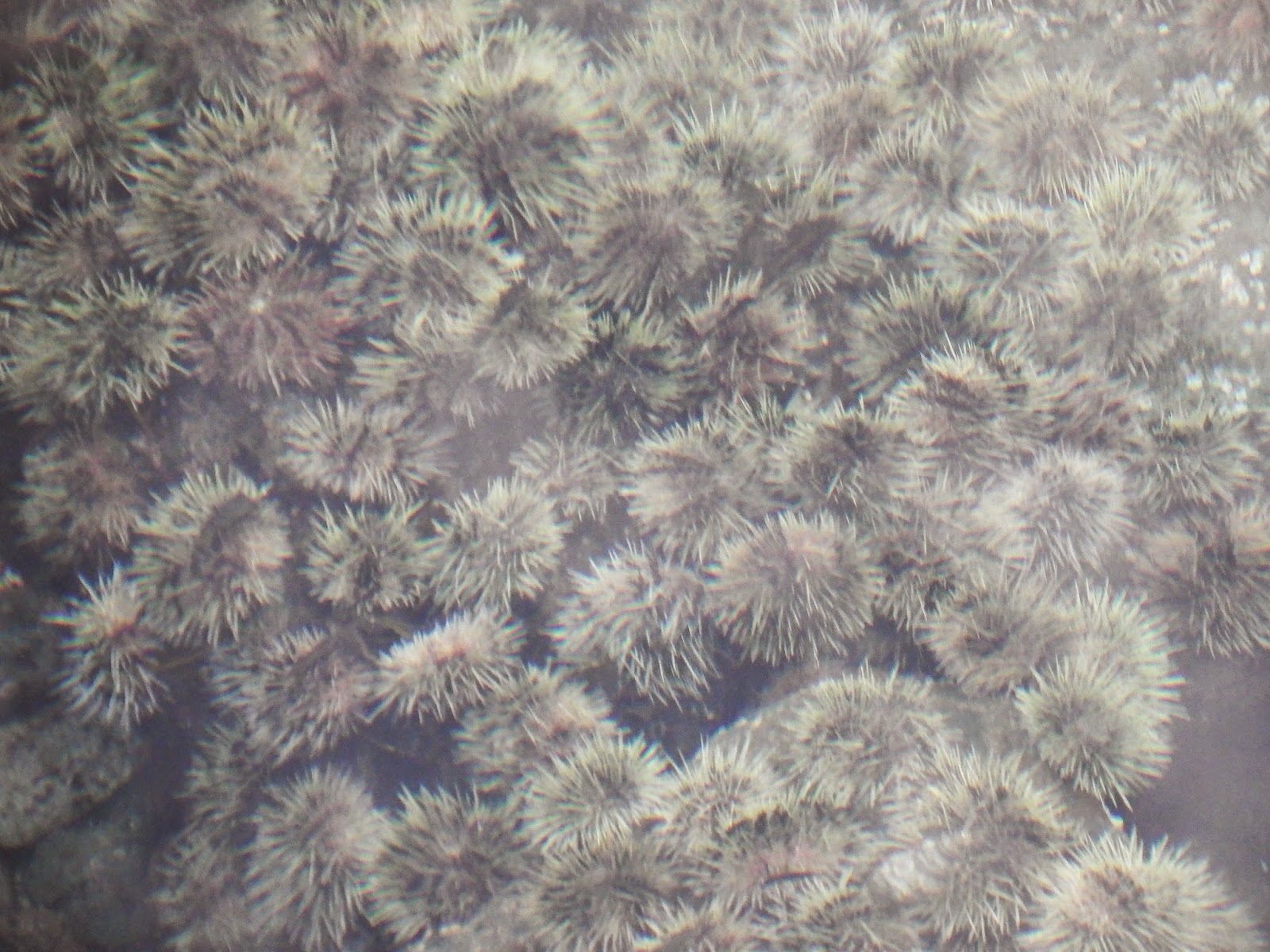 Green urchins move in when their predator Sea Stars disappear.  Recent photo from the dock in Quathiaski Cove.

Sea stars have been in a massive die-off  called Sea Star Wasting Syndrome, SSWS; that has been in the news. ( The newer ,better language is to call them sea stars, not starfish ) The infection blew up the coast from California through Alaska in just a couple of years. It was a mystery that seems to have been solved somewhat last autumn by the bio-detectives identifying a virus.  Luckily it seems that a few survivors may be starting a slow rebuilding population. There is much more to this, as you can find from the following links, and from Google.
http://www.livescience.com/48780-sea-star-wasting-disease-cause.html
http://www.eeb.ucsc.edu/pacificrockyintertidal/data-products/sea-star-wasting/

Sea Stars are the keystone species that was first used to establish the concept of keystone species. Locally, the effect to notice is that starfish eat sea urchins, ( as well as other things such as  bivalve clams).  Urchins eat kelp sprouts.  Sea Stars gone, green urchins populations exploding, kelp down.
Kelp creates a very important forest-like environment to shelter all sorts of creatures and small fish.  People have been keenly noticing losses or gains in kelp beds as indicators of ecosystems, prior or the starfish die-off.  Kelp is one of the greatest natural carbon storage systems. The previous well-known story-line about kelp has been how early fur trade hunting of sea-otters, which dine on urchins, has devastated kelp beds over the whole coast.  So, reintroductions and growing populations of sea-otters on the west coast is a good thing. 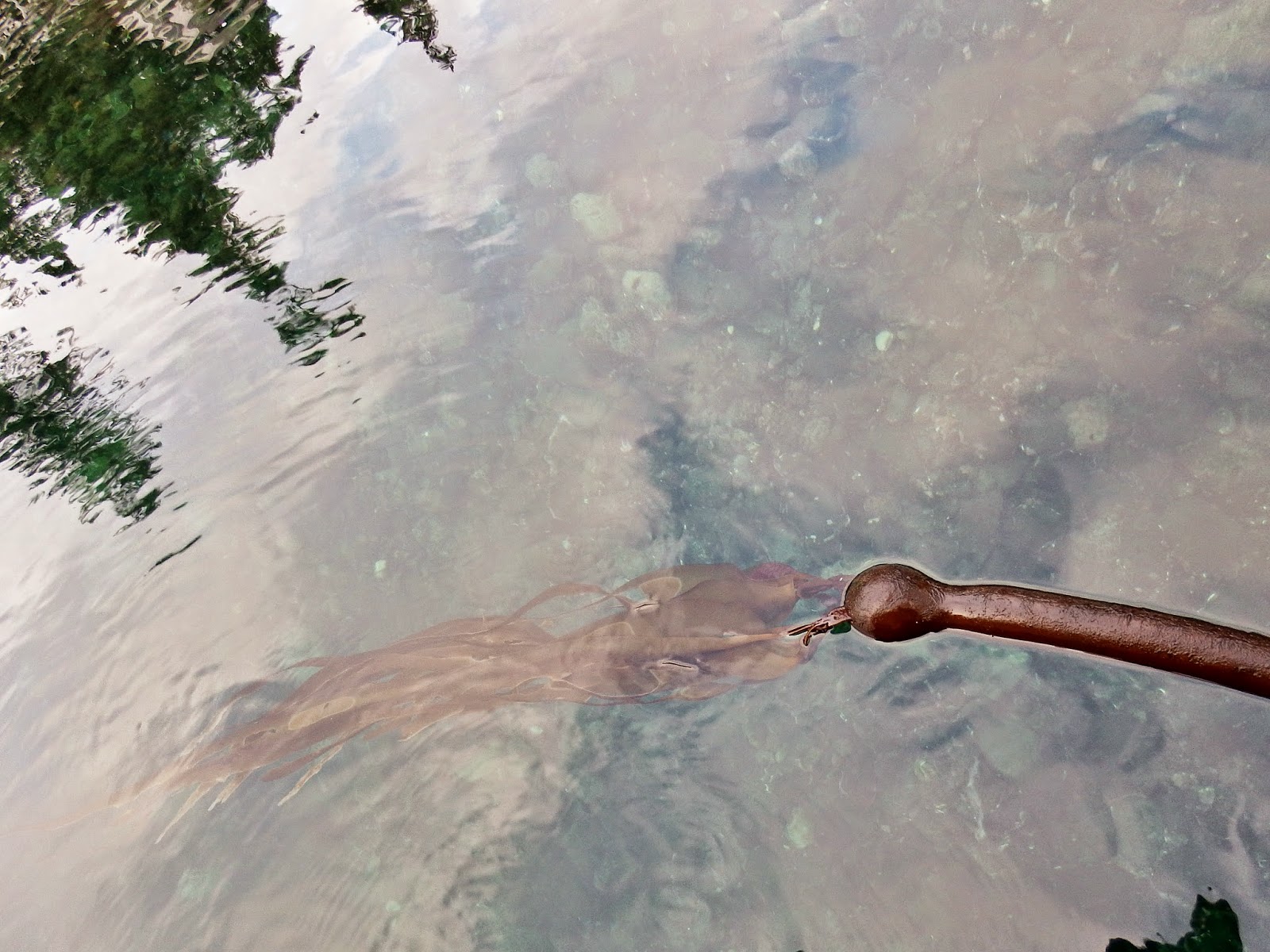 Winter survivor bull kelp, all alone on this part of the beach.  The leafs are a fraction of their full size.

Kelp is important , and remarkable. It is actually algae , not a plant, and the largest of that. It is an annual, and about the fastest growing plantish thing in the world, with the stem able to grow up to 2 feet per day in ideal conditions. The holdfast is a specialized root-like part that anchors the plant, then the stipe ( stem) which can be 50-80 feet long, or more, the bulb ,which contains enough carbon-monoxide to kill a chicken, and the long leaves near the surface which collect sunlight for photo-synthesis. As a fast growing annual, kelp usually dies in winter storms, but it is usual to start from scratch every year. However, kelp that can survive winter can live for many years. Bull kelp should get a lot more appreciation. http://themarinedetective.com/tag/bull-kelp/

Another cascading effect is that the unimpeded urchins are eating the fringed colander kelp beds which provide sheltered habitat for juvenile spot prawns.  The massive carpets of urchins are called “urchin barrens” and scientists are concerned about how eliminated species will recover. http://www.aquablog.ca/2014/07/sea-star-wasting-syndrome-affecting-other-marine-life/

Here in Quathiaski Cove,  the green urchins are taking over the bottom.  It took me a while to get a decent good photo because the tide is fairly high in daytime in winter. The photo at the top shows a dense cluster,  this next one is more typical of the green urchins grazing. 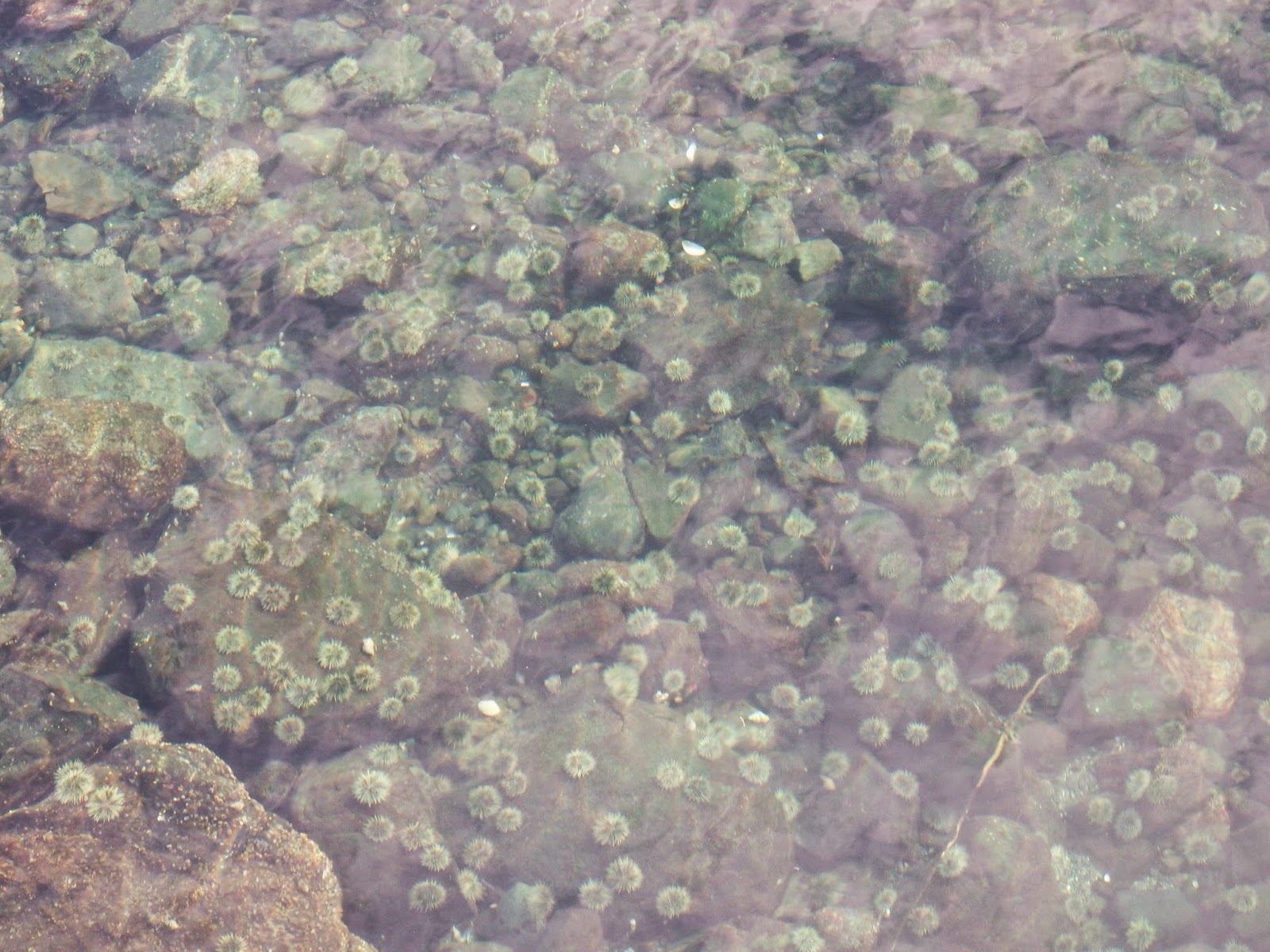 This past autumn, there was a flock of crows,( a murder of crows ) hanging around the docks in the north end of Quathiaski Cove, and crapping on the roofs, as they have never done before.  They were dining on green urchins which they could pick at low tide, and ripe chestnuts from a nearby tree, a good balanced diet. Both of these foods have shells that the crows cracked by dropping them on the docks, or the rocky shore.  If I could have got a good group photo of some of that action I would have titled it “ Murder at Dinner.” 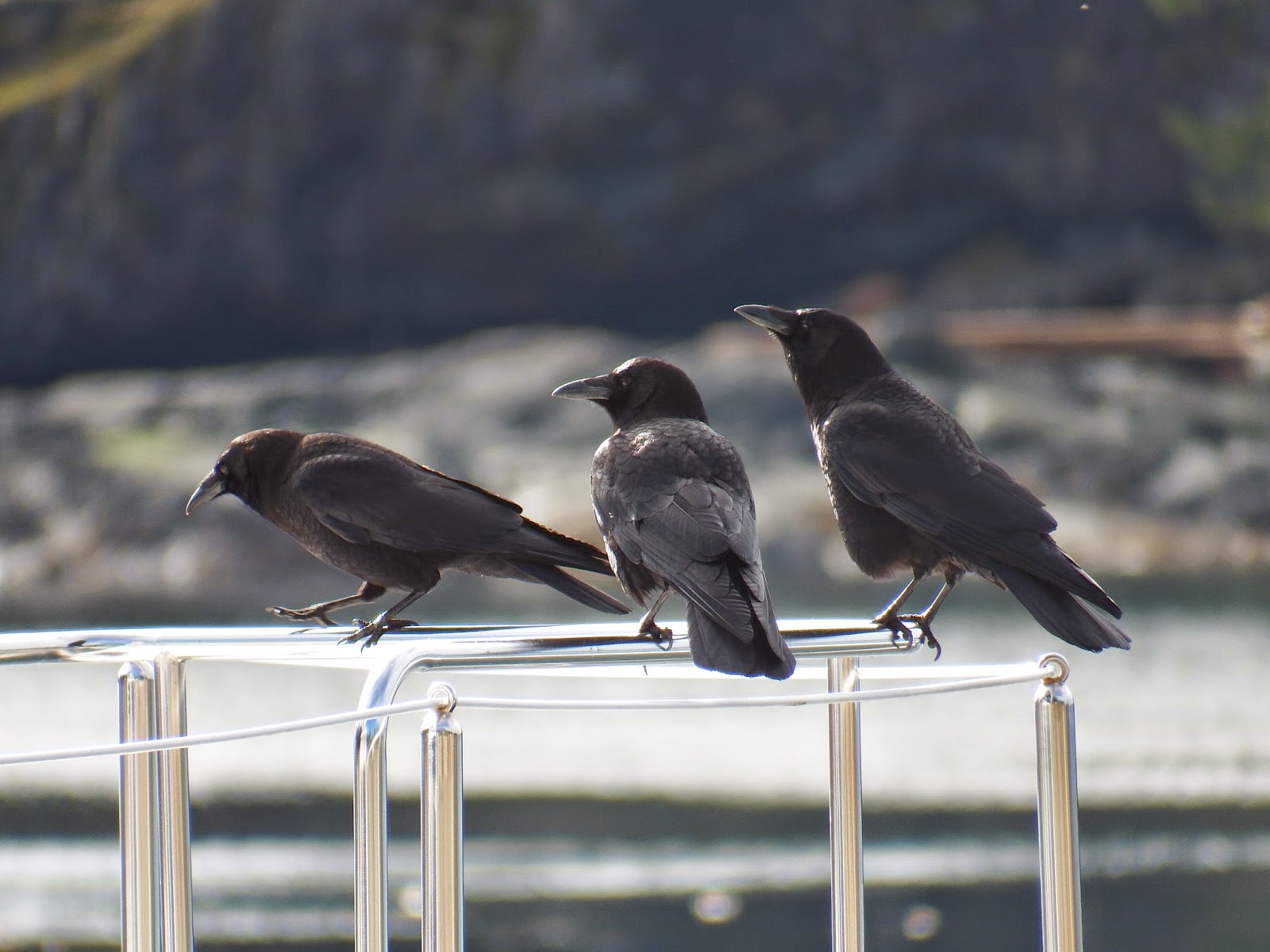 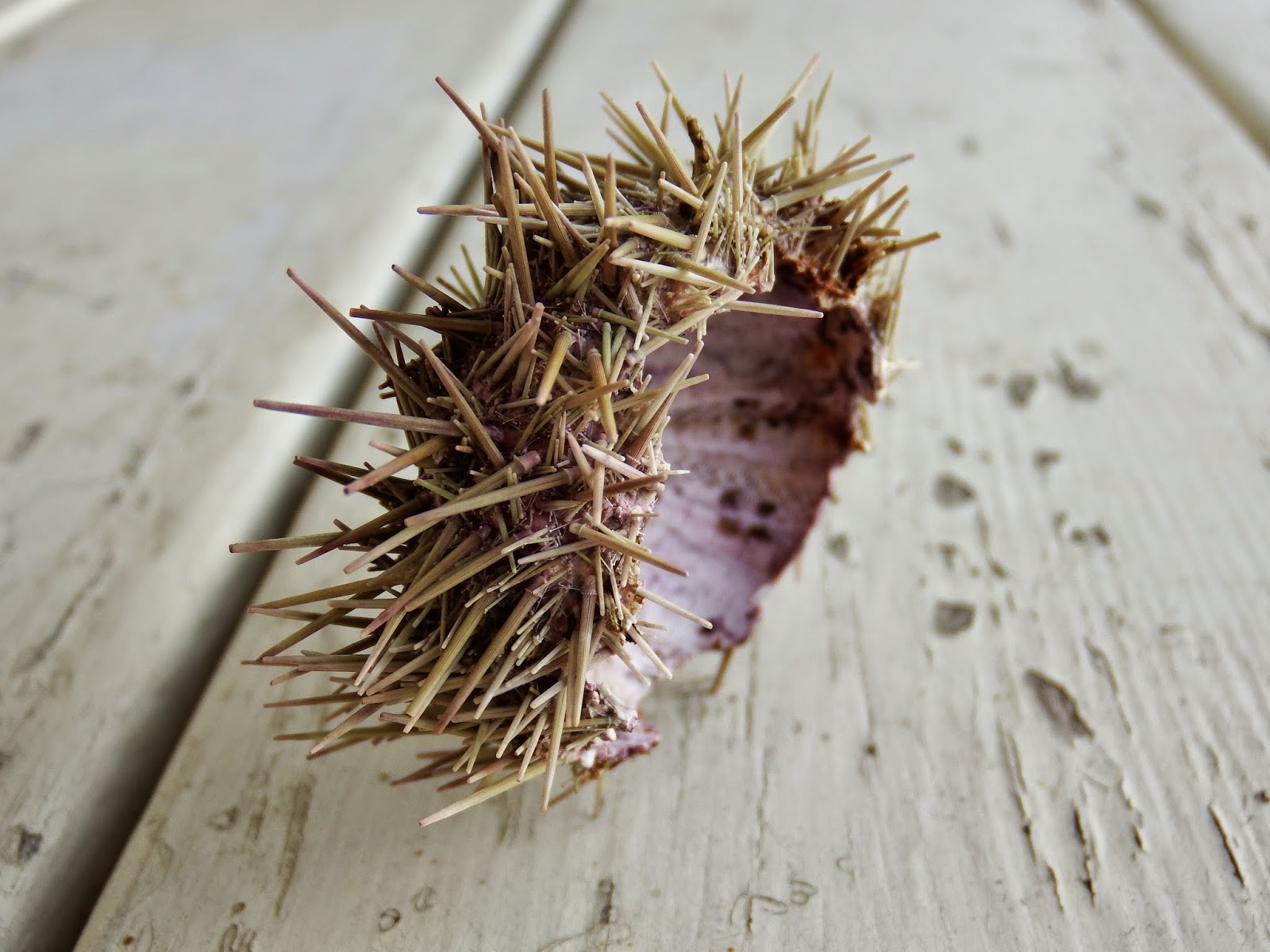 I don't want to leave this post sounding alarmist. The ecology may be changing, it is complicated, and very interesting, I think.  On the up side , chinook fishing right now in winter is as good as anyone remembers for decades, and indicates the vitality of the sea.  Winter chinook populations “inside’' predict good local spring and summer resident chinook populations, which we measure a sample of with good fishing.  I sometimes go down to the dock at night , especially around low slack, if is calm, and I can often see herring flashing.  That is another example of something clear to see, but hard to get a decent photo of.  Those Bright Fish give me a lift.