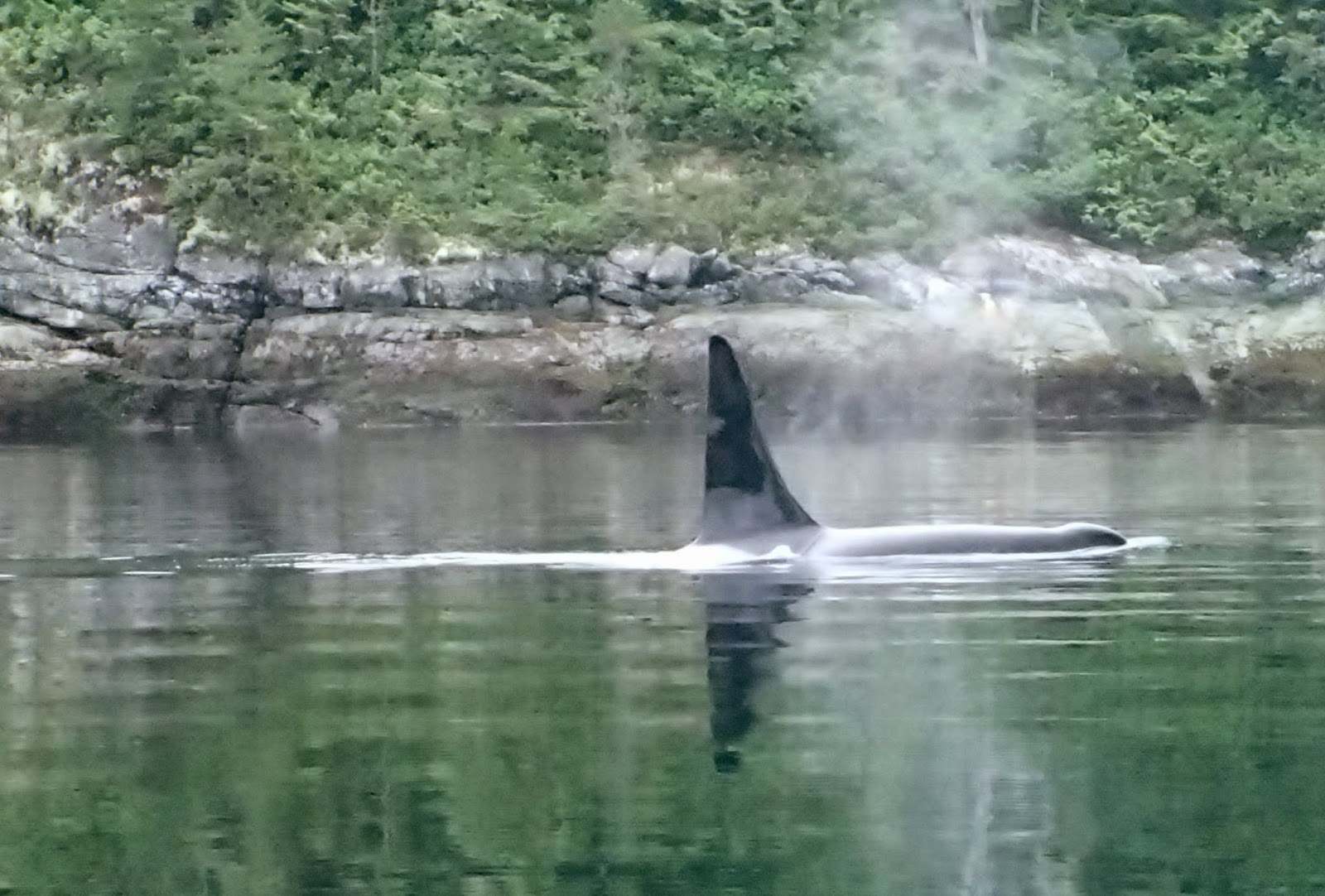 There was an extraordinary sight recorded on Youtube a few days ago. Orcas, also called Killer Whales, came into shallow water on a pebble beach on one of the nearby Discovery Islands to rub themselves. The fellows taking the video are standing on the shore mere steps away. Amazing video. Take a look.
https://www.youtube.com/watch?v=TJdjSjOGZuw&feature=youtu.be

Jackie Hildering , ( The Marine Detective ) says these are identified as the A42s, a family of "Northern Resident" Orcas which consists of the mother and four offspring.  The very big fin is a male, her son.
" Resident " really means summer resident, and these "Northern Resident" Orcas set up summer camp in Johnstone Strait north from Campbell River and nearby waters where the migrating salmon are funneled into the narrow Straits. They do range around, and are rare to see around here in winter. These Orcas are fish eaters and biologists report that they prefer chinook salmon to other fish.
I had assumed that these Orcas in the video at this time of year must be Biggs ( Transients ) that eat marine mammals. We have been seeing may more Biggs type in recent years. But Jackie says that the " Residents" do appear occasionally here in winter and feed also on halibut and rockfish. I am skeptical that there are enough of the bottom fish locally to sustain these animals without a lot of salmon too . At any rate, there must be a lot of fish of whatever kind to satisfy these big warm-blooded appetites .

Getting very close to Orcas disturbs them, or their prey, and viewing them requires following strict distance and direction guidelines which are now being enforced as law.  So, it is especially fortunate for these fellows to be on the beach when the Orcas come so close to them, almost to their feet.

( The photo above of a "Northern Resident" was taken by me while fishing this past July.)

For more about Biggs/Transient Orcas, especially about hunting dolphins, and links to videos, see my post " Orcas and Dolphins "  including a favourite link to a you tube video of Orcas corralling Pacific White-sided Dolphins in Hyacinthe Bay, Quadra Island.
Post April 17 http://gobrightfish.blogspot.ca/2014/04/orcas-and-dolphins.html