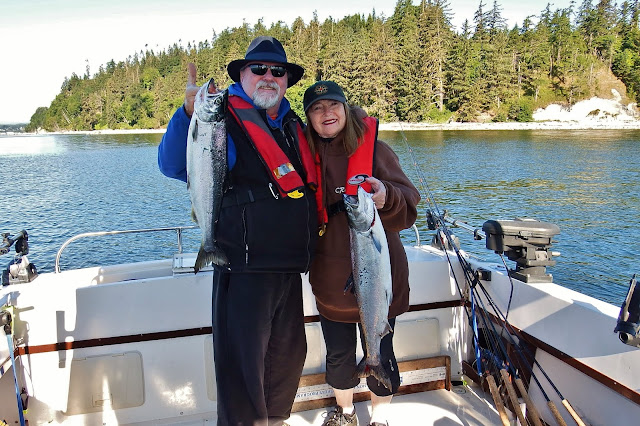 Scott and Sharon came fishing this morning specifically to target cohos. We are taking tissues samples which will be examined by biologists to see the DNA in order to learn which rivers they are  from.  We sampled and released 5 cohos, of which one was a hatchery marked one which is legal to keep. In addition Sharon caught a fiesty, bonus, chinook salmon , which will make some delicious dinners as well.  At 9 am we headed in.

All the fishing this morning was in less than 50 feet of water , and Scott was holding his rod, his favourite rod, with a one or two ounce weight and spoon.  This reminded us all of fishing years ago when fishing for cohos on light tackle ,  trolling with fly rods , was the popular norm. This past winter was the first in decades that significant numbers of cohos stayed over the winter in Georgia Strait , and we are watching them grow quickly. In springtime they are called bluebacks , and now we are at the beginning of July when they are getting to be bigger and stronger on the line.

The DNA from the fish we release is useful because wild fish need to be released , so there is not much information about them .