I don't generally post about trips when I am subcontracting to a lodge or working with other guides' guests, so there are gaps in my blog . Fishing has continued to be great .
After catching a chinook each , for three anglers , on the deep troll, we headed into the shallows and caught and released a slightly bigger chinook in just 30 feet of water, as well as releasing a few cohos.

This day we caught an incidental " Red Snapper".  Fish often have common local names and this one is really a Yellow-eye Rockfish.  There is concern about these, the largest of the rockfish family .  They grow nearly as old as people do, and they can get caught faster than they reproduce. Rockfish are built to live at depth and their swim bladders cannot cope with being brought to the surface. They usually die when released , often looking horrendous with eyes bulging out and with the stomach pushed inverted out of the mouth.   This is especially a problem for by-catch in commercial fisheries  in other areas of the coast , but it is a growing issue here , too.  The limit for rockfish is one per person, per day, but the intention of that was to allow retention of an incidental catch, so keeping one is legal, and so some people target them .

A new development is the descender device.  It seems hard to believe, but solid studies from California and Australia show that if the rockfish is lowered back down to the original depth , it can probably survive.    Even if the eyes bulge out and the stomach is inverted.  I've been given a sophisticated descender to try out. It opens it's grip at an adjustable depth based on the water pressure. So now we have the option to return these beauties to the dark depths they came from. 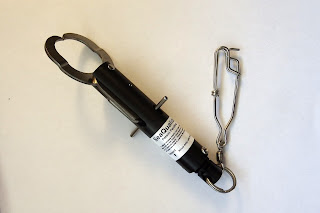